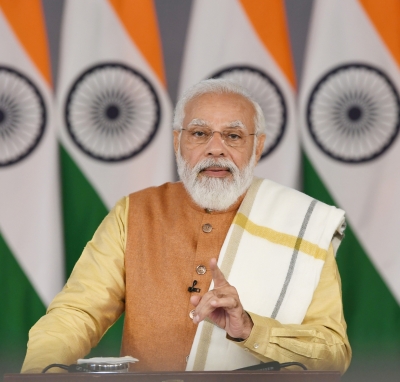 New Delhi–Prime Minister Narendra Modi on Sunday said that it is unfortunate that after Independence, along with the culture and tradition of the country, work was done to erase the contribution of many great personalities.

“The penance of lakhs of freedom fighters was sought to be diminished, but now these wrongs are being corrected.

“The freedom struggle involved the penance of lakhs of countrymen, but efforts were made to limit their history as well. But today, after decades of independence, the country is correcting those mistakes…,” he said, after unveiling a hologram statue of Netaji Subhas Chandra Bose on the occasion of his 125th birth anniversary.

“Netaji used to say, ‘Never lose faith in the dream of an independent India, there is no power in the world that can shake India’. Today we have a target to build a New India before we complete 100 years of independence in 2047.”

“I cannot forget the moment when I unfurled the flag at Red Fort on October 21, 2018, the day when the Azad Hind Government completed 75 years. It was my good fortune that our government got the opportunity to declassify the files related to Netaji.”

He said that the the hologram will be replaced by a granite statue. “The statue will not only remind us of our duties towards the nation but also inspire the generations to come,” he said.

The Prime Minister also said: “We have made all-round efforts to make disaster management more effective. We have not only focused on relief, rescue, rehabilitation but on reforms as well. We strengthened the National Disaster Response Force (NDRF). From space management to planning and management, we adopted best practices.

“We have seen a lot of joint military exercises in different countries… But for the first time, India has started the tradition of joint drill for disaster management.” (IANS)