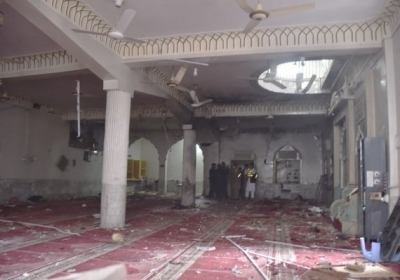 Peshawar– The recent devastating suicide bombing, targeted at a Shia Muslim mosque in Peshawar has marked the re-emergence of the dreaded Islamic State-Khorasan (IS-K) terror group in Pakistan.

The IS-K claimed responsibility for the attack in which a suicide bomber blew himself up after entering into the mosque during Friday prayers, claiming lives of at least 63 and injuring over 200.

It also claimed the terror attack just outside Kabul airport during the evacuation process of foreign forces was underway after the Taliban takeover, as well as many others on mosques and other places in Afghanistan, becoming the biggest opposition to the incumbent regime.

Pakistan had been on consultation with the Afghan Taliban and working towards a joint strategy to counter terror threats from organisations operating along the two countries’ border.

The attack in Peshawar comes at a time when the country’s Counter-Terrorism Department (CTD) killed an IS-K commander named Bilal Khan, during a police encounter on January 19 this year.

It is believed that the commander’s killing activated many sleeper cells, associated with the terror group, who planned to respond with a major suicide attacks.

It is believed that Bilal Khan, who was a member of the Tehreek-e-Taliban Pakistan (TTP), joined the IS in 2015, pledging allegiance to Abu Bakar Al-Baghdadi, the group’s slain leader.

Experts believe that intelligence-based operations by Pakistani security agencies against terror elements, including the IS-K, have not only increased targeted attacks, but supporters of the Afghan Taliban have also come under deadly attacks in Peshawar.

The emergence of the IS-K in the heart of Peshawar raises major concerns and a new set of challenges for the Pakistani authorities, as neighbouring Afghanistan conducts search operations in various parts, looking to neutralise the militants.

Some reports also indicate that many IS-K militants have already fled Afghanistan and entered Pakistan, while sleeper cells of the group have also been activated.

It is because of this reason that a major surge of terror attacks is being witnessed in Pakistan.

According to data from Pakistan Institute of Peace Studies (PIPS), there were at least 207 incidents of terrorism in Pakistan in 2021, a 45 per cent increase over 2020.

The TTP has also been carrying out targeted attacks in various parts of the country, adding on to the challenges Pakistani security forces are confronted with.

Pakistan’s Interior Minister Sheikh Rasheed said that a fresh wave of terrorism has hit the country where the TTP is targeting policemen in major cities with an aim to breach and break the first line of defense.

While the threat of terrorism looms, many believe that the IS-K can be a much bigger problem than the TTP.

While negotiations with the TTP remains on the agenda of the Pakistani government, it is feared that disagreements among the TTP militants, as well as a deal with Islamabad, may push them towards joining the IS-K. (IANS)