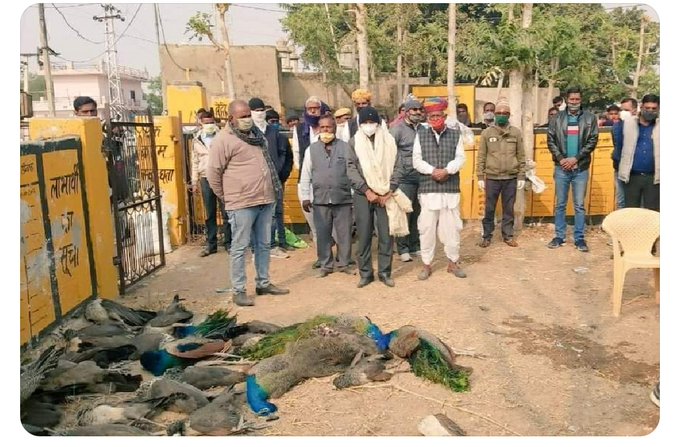 Jaipur–After the recent confirmation of bird flu in Jhalawad district, around 50 birds including peacocks have been found dead in Kalwa village of Makrana sub-block in Nagaur district of Rajasthan.

A medical team is trying to cure around 50 peacocks while a post mortem was being conducted on 2 peacocks till the time of filing this report.

Kalwa sarpanch Dilip Singh confirmed that many peacocks were found dead under a banyan tree and the matter was reported to the authorities.

Didwana Ranger Arjun Ram said that one crow, five pigeons and a few more birds have been found dead. Also a few birds were found injured who are being trated.

Nagaur MP Hanuman Beniwal demanded that the state forest minister look into the issue and order a probe into the matter.

“Received the heart wrenching report on peacocks and birds being found dead in Makrana area of Nagaur district. Forest minister should look into the issue,” he said in a tweet.

Mohanlal Meena, Chief Wildlife Warden told IANS, “I am unaware of the issue. Will collect information in this matter.”

Bird flu was confirmed on Wednesday in a Jhalawad area where around 100 crows were found dead. The district administration has declared a zero mobility zone within one kilometre of the area to ensure the infection does not spread to other birds. (IANS)