“I am truly proud of the IAGB Executive Committee for pulling off yet another successful India Day at the Boston City Hall Plaza,” said IAGB President Aditi Taylor. “Thanks to the energy and enthusiasm of all the performers, choreographers, vendors/exhibitors, corporate sponsors, our food vendor, the various partners we worked with and the blessings of the weather gods, it was indeed a vibrant display of Indian pride and heritage in the heart of Boston.”

IAGB Vice President Sanjay Gowda, said he was thrilled and delighted with the huge participation and support from the community members.

“City Hall Plaza staff estimated that around 12 thousand people participated, and it is the highest in the recent years at India Day Celebrations,” Gowda told INDIA New England News. “Very proud of the AGB team and my sincere thanks to everyone who made this event a grand success. A special thanks to our sponsors and vendors for their continued support.” 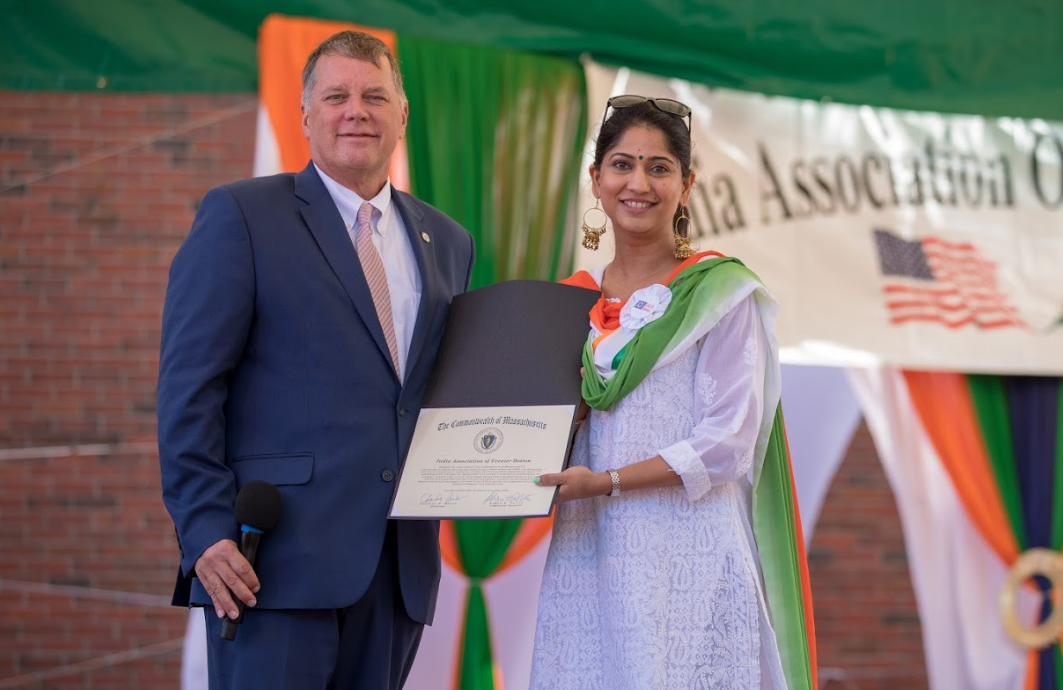 Ms. Mangipudi received IAGB Hall of Fame Award as Distinguished New Englander of Indian origin for her civic contributions to the adopted land.

Ms. Mangipudi has been living in the U.S. since 1986, when she arrived from India.  She has made Nashua her home when she moved here in 1989, and has lived here with her husband Krishna Mangipudi, and children. She completed a Master of Science (MSc) in Speech and Hearing from the All India Institute of Speech and Hearing in India and her clinical certification at the Massachusetts Eye and Ear Hospital in 1988.  After a long set of public service activities, Latha ran for public office. Her first term in NH House of Representatives was in 2013 and she has recently won her fourth term.

Sudhakar Rao and his wife Usha Rao have been living in Boston area since early 80s and have been very quietly and actively involved in Indian American community. Both are the founders of Kalatarangini, which supports and facilitates the cultivation of various classical art forms from India among the younger generation growing up outside India with a mission of “passing on tradition”.

Kalatarangini brings Indian artists and conducts concerts, workshops for younger generation in the Boston area free of cost. They are also one of the founding members Tulu Koota in the New England regions, under the auspices of which he has organized picnics, concerts and celebrations of festivals from the South Kanara regions, and he has also been a past President of Kannada Koota.  Usha is currently serving on an all female board of the Kannada Koota.

The couple volunteer relentlessly every week in many events that are being conducted through out the year in any part of Greater Boston Area. He is a permanent volunteer at Chinmaya mission and Raghavendra temples, helping with preparing food and feeding thousands of people every week.