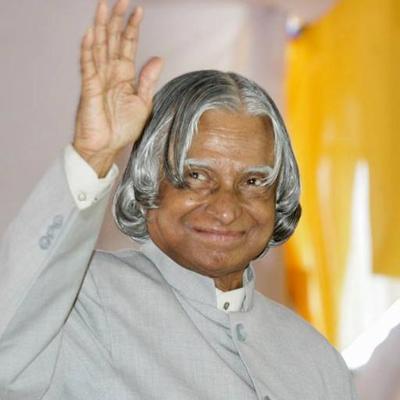 New Delhi– In a tribute to former President A.P.J. Abdul Kalam on his first death anniversary, Delhi Chief Minister Arvind Kejriwal on Saturday inaugurated a memorial in his name in the national capital.

The memorial, which has the notes, books, clothes and other personal items of the former president, was inaugurated in Dilli Hatt, NIA in south Delhi.

“Kalam sir is one of those people who seldom take birth on the earth and whose thoughts remain immortal,” Kejriwal said on the occasion.

Kejrial congratulated the team who participated in the construction of the memorial.

“The memorial will inspire the youths. We should implement his thoughts. He used to listen to the voice of common people and always wanted the youth to be instilled with good thoughts and knowledge,” Kejriwal said.

He said that Kalam had visited the Delhi Secretariat nearly a month before his death and had guided them in improving the education standard in Delhi.

“We wanted him to address the teachers and principals of the government schools in Delhi but his soul departed before we could chalk out our plan,” the CM said.

“We should take forward his teachings.”

Sisodia said that Kalam’s teachings will keep guiding them. “We take pledge to fulfil his dreams.”

Kalam’s grandnephew, A.P.J. Sheikh Salim also attended the function. He thanked Kejriwal for constructing the memorial and said it will keep Kalam’s thoughts and teachings alive and also help the youth to enhance their knowledge.

Kapil Mishra brought his belongings back to Delhi in April.