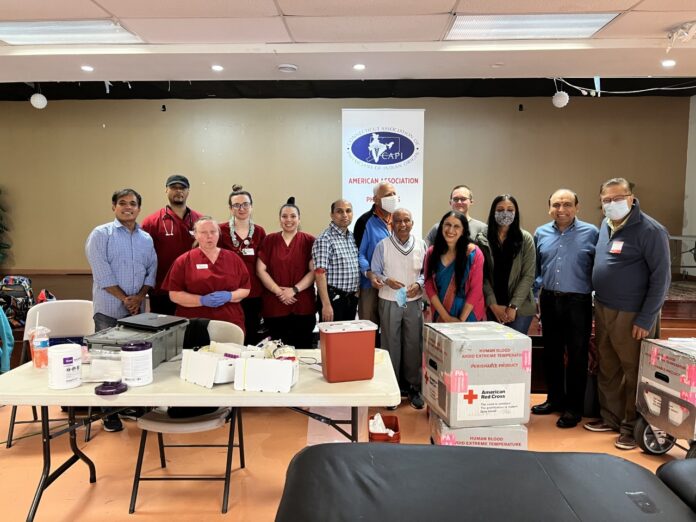 Led by Dr. Sushil Gupta, president of CAPI, the 2nd blood donation drive by CAPI in the past few months has been inspired by the call by Dr. Anupama Gotimukula, President of national AAPI, who is leading AAPI in its efforts to host Blood Donation Drive in as as mnay as 75 cities across the United States, to commemorate India’s 75 years of Independence.
“In line with the national AAPI’s motto, we at CAPI are happy to join in several other AAPI Chapters and lead this noble initiative to donate blood with the objective of saving lives around the nation,” said Dr. Gupta. “We plan to organize future blood drives in other parts of Connecticut in the near future.”
Dr. Gupta expressed gratitude to “Drs. Subbarao Bollepalli, Sujata Prasad, Jaya, Daptardar, Viji Kurup from CAPI, who had volunteered to organize this event and made it successful.”
He also thanked Hari Krishna, President of the Middletown Hindu Temple Board and Kiran Pyneni, who had helped to provide the venue and made all the arrangements for the blood drive.
“It is a spot exemplar as a ‘team work’ dedicated to the social welfare and happiness of the community,” said Dr. Jaya Daptardar, an organizer of the event and had donated blood during the highly successful event. “The Blood Drive, while honoring India on her 75th year of Independence, has been dedicated to the Fallen Heroes, who have sacrificed their lives to save the lives of others infected with the deadly Covid pandemic,” Dr. Daptardar added.
Drs. Gupta, Daptardar and Prasad Sureddy, in addition to  coordinating the efforts and organized the successful Blood Drive, also donated Blood during the Drive.
“I am grateful to the dozens of local AAPI Chapters including CAPI for initiating and organizing the Blood Donation Drives and Stem Cell Registration across the nation, in honor of the Fallen Heroes of Covid-19, and as India is celebrating 75 years of our Independence. I am so proud that we have taken this initiative to organize AAPI Blood Donation Drives in 75 cities across the nation,” said Dr. Gotimukula.
Each blood component of a whole blood transfusion can help up to three different people. Pointing to the fact that Blood cannot be manufactured despite medical and technological advances. The only way we can give blood to those who need it is through donation. It doesn’t cost us anything to donate but your donation saves lives. Blood is needed every two seconds, said Dr. Meher Medavaram, Chair of AAPI’s national blood donation drive.
CAPI was formed with the objective of promoting charitable and philanthropic activities; communicating with other Indian associations in North America to promote cultural and social events, and fostering a relationship with future generations of physicians of Indian Ancestry.