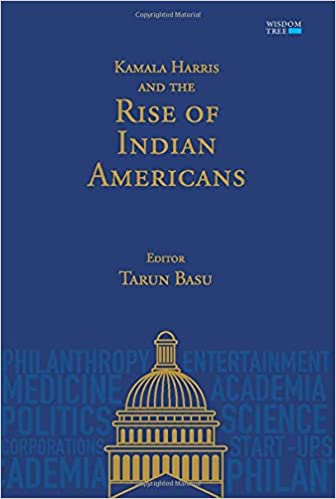 This Thursday, July 29th, at 9PM ET/6PM PT, Indiaspora will host a virtual book launch to celebrate the release of “Kamala Harris and the Rise of Indian-Americans”, a perhaps first-of-its-kind anthology on the Indian American community in the U.S.

Kamala Harris and the Rise of Indian Americans (released July 15th) was inspired by the Vice-President of the United States and evidences the progress and accomplishments of the Indian-American diaspora.

The anthology, compiled by veteran editor Tarun Basu and published by award-winning Wisdom Tree, explores the story behind these advancements through 16 essays written by influential Indian Americans. From politics to the new administration, entrepreneurship to technology, medicine to hospitality, science to academia, business to entertainment, philanthropy to social activism, leaders from various arenas detail their own paths to success and offer their perspectives on diasporic progress.

These stories culminate in a larger narrative of the Indian-American community’s coming-of-age in the U.S.

“A fascinating and inspiring story of how an immigrant population from a developing country, with low education levels, became the most educated, highest-earning ethnic community in the world’s most advanced nation in almost a single generation,” says Basu.

Several of the authors of this anthology will be speaking at the book launch, including:

Tarun Basu, veteran editor, media commentator, policy analyst and head of the Society for Policy Studies, a think tank running the South Asia Monitor, and author of the chapter, “From Struggling Immigrants to Political Influencers: How a Community Came of Age”

Dr. Shamita Das Dasgupta, Co-founder of Manavi, a nonprofit that focuses on violence against women in the South Asian community and co-author of the chapter, “‘Success’ Through Lens of Women: Celebrating an Alternative Model of the Marginalized”

Raj L Gupta, the Chairman of Aptiv PLC and Avantor Inc and former Chairman, CEO, and President of Fortune 500 company Rohm and Haas, author of the chapter, “Success Drivers of Indian-American CEOs: Fostering a New Wave of Corporate Leadership,” and an Indiaspora member

Bijal Patel, Chairman of the California Hotel & Lodging Association (CHLA), author of the chapter, “Three Generations of Hoteliers: How Indian-Americans Reinvented the Hotel Industry” and an Indiaspora member

MR Rangaswami, Founder of Indiaspora, who is an entrepreneur, investor, community builder, and author of the chapter, “An Accidental Capitalist: How Indian-Americans Made Their Mark in Silicon Valley”

Dr. Maina Chawla Singh, a scholar of gender, identity, and the Indian diaspora, who has lectured widely at Oxford, Cambridge, Yale, author of the chapter, “A Community Zooms into the Political Spotlight” and a previous Indiaspora Forum participant.

The panel discussions, moderated by Indiaspora’s Executive Director Sanjeev Joshipura and Indiaspora’s Founder MR Rangaswami, will be followed by Q&A.

There is no cost to attend; this event is free and open to the public.

What: Indiaspora Virtual Book Launch of Kamala Harris and the Rise of Indian Americans