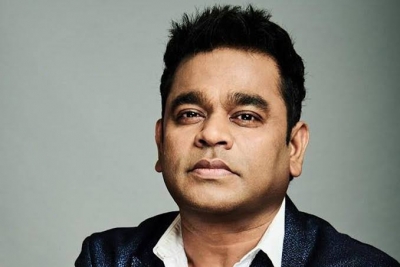 Mumbai– During the inauguration of the India pavilion at Cannes 2022 on Wednesday, Academy Award winner A.R. Rahman explained why we should tell stories about West and try to break the boundaries.

“I can’t say much because I’ve been in the industry for almost 40 years – ten years of playing outside as a musician and 30 years as a composer. I was a director for the sensory cinematic experience,” he said.

Rahman further shared that despite the fact we have our stories to tell, we must not restrict ourselves.

“Even though we have so many stories, we should tell stories about the West because we have a narrative about the West. We should be doing that.”

“The West does Gandhi, he (Shekhar Kapur) is the man who has done ‘Elizabeth: The Virgin Queen’. I am super inspired by him,” he added while hinting towards filmmaker Shekhar Kapur.

On the reason for choosing English language for his film, he elaborated: “The reason why I did this in the English language and for an international audience was to see if it is possible to break those boundaries and set a new path. Even if we fail it’s fine. I am talking about Le Musk, the sensory cinematic experience in Cannes XR. I want to thank my whole team, and please do check it out and see how we can improve and celebrate it. God bless you all. Thank you so much.”

The Indian delegation led by I&B Minister Anurag Thakur was present for the inauguration of the Indian pavilion at the ongoing Cannes Film Festival in France.

Deepika Padukone is attending the festival as a jury member, Aishwarya Rai Bachchan, Kamal Haasan, R Madhavan, Shekhar Kapur and Tamannaah Bhatia are among the Indian celebrities attending the 75th edition of the film festival. (IANS)