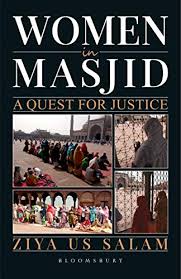 New Delhi–Read about the new Great Game afoot in the Himalayas involving India, China and Tibet; a forceful argument for giving Muslim women a chance to reclaim their sacred place; and finally, explore the intricacies of Dalal Street through a desi potboiler.

Noting that Buddhism is unfortunately being used “as yet another front for the rivalry between India and China”, the book laments that there are also “systems operating in India that prefer to employ Buddhism for meeting narrow interests such as using the ‘Tibet card’ to offset China’s influence” terming this “myopic”.

China’s “Buddhist diplomacy” has focused on Nepal and Bhutan, and the Indian Himalayan regions of Arunachal Pradesh and Sikkim, which have sizeable Buddhist populations and are vulnerable to this influence.

This, at a time “when the Western romance with Tibetan Buddhism is gradually fading even as India is forced to watch the ensuing developments askance. More seriously, India’s ability to deal with the Buddhist Himalayas vis-vis China only through the prism of military power, is unlikely to be sufficient”, writes Stobdan, a distinguished academician, diplomat and author, and an expert on foreign policy and national security.

Then, “one shouldn’t lose sight of the strategic dimension of Buddhism. China sees a great advantage in employing Buddhism alongside its hard-power pursuits, especially to seek political and economic leverage” in the context of its OBOR (One Belt One Road) initiative,” contends Stobdan, a former Ambassador to the Kyrghiz Republic and who has also served in the National Security Council Secretariat.

The book asks a fundamental question: Prophet Muhammed clearly permitted women to enter mosques – the norm in mosques across West Asia, Europe and the US. Yet, women are virtually barred from entry in a majority of mosques across India. There’s no explicit ban, just a tacit one.

What, then, is the way forward?

Pointing to Kerala, which is emerging as the “flag bearer” of Muslim women’s rights in respect to mosques, the author says: “It is time for each mosque to declare that it is un-Islamic to prevent women from coming to the mosques.”

Then, more women need to be appointed to mosque committees as there is hardly any female representation, with men deciding issues for both men and women, while, if logistics demanded it, there can be separate entry and exit gates for women.

“Ultimately, women’s prayer space has to be restored, just as the Prophet had visualised it: behind men in the last row, in a position where they can see the imam and not an obscure cornerfrom where they can neither see the imam, nor hear the recitation clearly,” says the author, a noted literary and social commentator who is the Associate Editor of the “Frontline” news magazine.

Clearly, it’s time for a new beginning for Muslim women in India.

Anurag Tripathi’s second book, loosely translated as “Street of Fixers”, is about the roller coaster ride that the stock market takes you on, an account of the best and the worst it has to offer.

It is a narrative beyond what the financial pages captured via numbers; the story of four business grads Varun, Pooja, Anil and Devika, drawn to high-paying trading jobs but eventually realizing that nothing is what it appears to be.

Tripathi holds his readers by revealing the different colours of Dalal Street and how people flip-flop between their greed and fear that are known to have taken the world forward and also caused some of the biggest economic crises.

The book is a desi potboiler which may work as it’s timing is just right. The Indian stock markets have for the past 3-4 months seen massive volatility, especially after Finance Minister Nirmala Sitharaman presented, post the general elections that returned the NDA government to power, the full budget in July.

However, most books on the stock markets are in the non-fiction genre. Tripathi’s book is a brave attempt to break the shackles. (IANS)