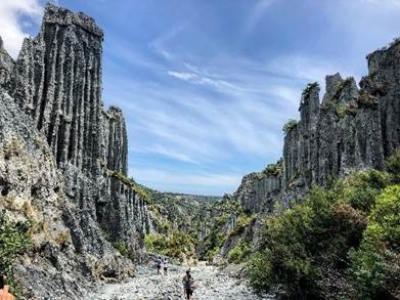 New Delhi– New Zealand’s striking scenery captured the attention of moviegoers all around the world and emerged as the uncredited star of the wildly popular The Lord of the Rings film trilogy. It has uncommon fauna, glaciers from the ice age, craggy mountains, deep lakes, meandering rivers, and native woods, many of which have not changed much since prehistoric times. You can enter the heart of Middle Earth by visiting these breathtaking places.

The distinctive and varied topography of New Zealand’s North and South Islands is obviously the closest thing on earth to this compelling fictitious universe, even though over 150 locations were used throughout the nation and the most of the sets are now little more than a distant memory. Check out our list of the greatest filming places to visit if the new Rings of Power series has inspired you to seek out Middle-earth adventures and live out your Tolkien fantasies in New Zealand.

A Middle-earth guided tour of New Zealand is inconceivable without beginning in Hobbiton, the hobbits’ holiest site. With a guided walking tour of HobbitonTM, as seen in The Lord of the Rings and The Hobbit Trilogies, you can discover the verdant meadows of the ShireTM in the heart of the Hamilton-Waikato area. Sir Peter Jackson discovered this privately owned family farm in 1998 when scouting potential filming sites from the air for the Lord of the Rings Trilogy. It was restored in 2011 for The Hobbit Trilogy to serve as a permanent tourist destination and became famed as the backdrop for Hobbiton.

Queenstown was a popular choice for several of The Lord of the Rings’ filming locations because of its amazing, varied scenery and convenient location. Arwen used Skippers Canyon as the Ford of Bruinen, where she conjured a mystical flood to vanquish the Nazgul. One of The Hobbit: An Unexpected Journey’s most magnificent settings is Earnslaw Burn, a glacier with flowing waterfalls that plunge down a massive rock wall. Here, after leaving Rivendell, Bilbo and The Company are seen carrying on with their mission.

Experience the numerous filming locations in the Queenstown region in a variety of ways. to a helicopter tour with Glacier Southern Lakes Helicopters, from a 4WD excursion with Pure Glenorchy or Nomad Safaris.

It was an important setting for the making of The Lord of the Rings and was also known as “Wellywood” for its prowess in the film industry. Mount Victoria, which is a short stroll from the heart of Wellington, is the area that is easiest to get to for filming. To represent Hobbiton Woods, where the hobbits took cover from the dark riders, the mountain’s forested parts were employed. The Fellowship of the Ring’s first filming in 1999 was also done here, according to this report.

You may reach the spooky Putangirua Pinnacles, where Aragorn, Legolas, and Gimli searched for the Paths of the Dead, by driving across the hills to the Wairarapa region. Make a day of it by taking the train; the Wairarapa is Wellington’s wine area, so there are lots of places to eat and drink after your exhausting day of movie-watching.

In The Lord of the Rings: The Fellowship of the Ring, the orc-infested Mordor and Mount Doom (Mount Ngauruhoe), where it all began with the forging of the Great Ring, were perfectly situated in the barren, volcanic Tongariro National Park and Mount Ruapehu. To visualise the fiery peaks of Mt Doom, visitors have been known to hike to the top of Mt. Ngauruhoe on the Tongariro Alpine Crossing. The hike is not easy, thus it is best to embark on a guided excursion like Adrift Tongariro. As you hike through the National Park, you’ll pass other filming locations and see the craters, sparkling lakes, mountain springs, and volcanic rock.

Nelson Tasman – Dimrill Dale, Exit from the Mines of Moria, and the creator of The One Ring

The South Island is a filmmaker’s paradise because of its dramatic landscape, which includes high mountain ranges, deep wilderness, and expansive valleys that are all close to populated regions. Lord of the Rings devotees love the breathtaking natural scenery of the Nelson Tasman region because it reminds them so much of Sir Peter Jackson. Mount Olympus and Mount Owen, sometimes known as Dimrill Dale, are found in Kahurangi National Park.

The scene where The Fellowship hides from Saruman’s black crows includes Mount Olympus and its Boulder Lake. The crebain crows of Saruman spotted the travellers below while they were resting and preparing a supper here. They were looking for information about the One Ring. In The Fellowship of the Ring, Mount Owen is where the fellowship found refuge after leaving the Mines of Moria. Beyond the natural beauty, Nelson is home to Jens Hansen’s artistic talent. (IANS)