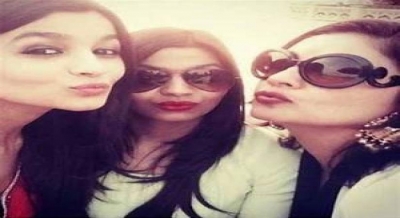 New Delhi– Remember the time when your sibling wore your clothes without your permission, hid the TV remote and also fought with mom to defend you? Siblings make for the best of friends. It’s a different kind of friendship — unfiltered, pure and entertaining, a bond which is irreplaceable.

This Raksha Bandhan, we take a look at Bollywood’s half siblings — who might have not spent their entire childhood together and might not share the same set of parents, but they’ve still got each other’s back. And, they’re giving us all kind of modern family goals.

Actor Arjun Kapoor was recently spotted with Janhvi Kapoor and Khushi Kapoor at their cousin’s wedding. They’re often seen spending time with each other, posting for each other on social media and also have been very honest about their relationship over the years. While naturally Arjun is very close to his sister Anshula, he’s warming up to his half sisters whole-heartedly.

The best kinds of relationships are those with healthy boundaries. Actor Saif Ali Khan’s children are frequently spotted in each other’s company, from birthdays to celebrating festivals, and the annual rakhi day, the cool kids are always having a good time.

With upcoming actress Sara Ali Khan being the most active on Instagram and from what can be seen from interviews and pictures, Sara shares a very cordial relationship with her father’s second wife Kareena Kapoor Khan. The Khans together make for a fun crew.

Actors Shahid Kapoor and Ishaan Khattar, the Bhatt sisters — Pooja, Alia and Shaheen, Prateik Babbar and siblings Juhi and Aarya are all half siblings in the film industry who are known to be each other’s biggest cheerleaders and openly express their affection for each other. (IANS)