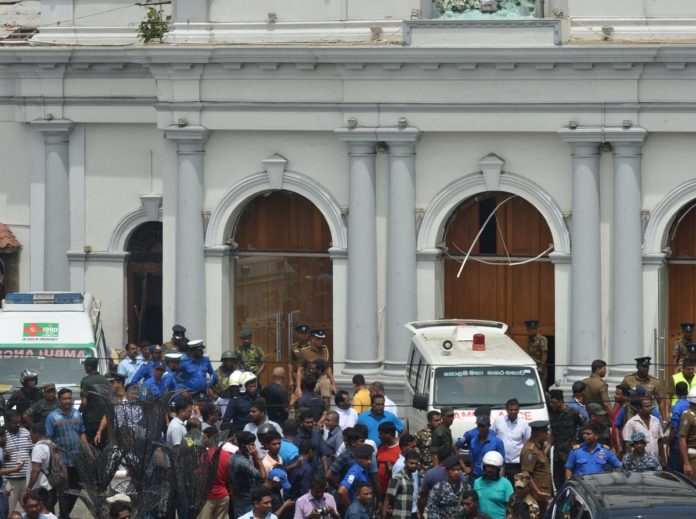 New Delhi– Four Indians were among those killed in the suicide bombings in Sri Lanka on Easter Sunday, while many others, including a leading Tamil actress, had a narrow escape.

External Affairs Minister Sushma Swaraj quoted the Indian High Commission as saying that it had been informed by the National Hospital in Colombo about the death of three Indian nationals — Lakshmi, Narayan Chandrashekhar, Ramesh.

“We are ascertaining further details,” the Minister said.

A fourth casualty was reported by authorities in Kerala, who said that a woman hailing from the state was killed in Colombo where she was holidaying.

Kerala Chief Minister Pinarayi Vijayan expressed condolences over the death of 58-year-old P.S. Raseena, who arrived in the Sri Lankan capital along with her husband to meet their relatives engaged in business in Colombo.

Raseena and her husband, who hail from Kasargode in Kerala, live in Dubai and were staying at one of the three hotels in Colombo targeted by the suicide bombers.

Meanwhile, noted Indian Tamil actress Radikaa Sarathkumar had left one of the three hotels in Colombo just before it was bombed.

Radikaa tweeted that she was staying at the Cinnamon Grand, located near the official residence of the Sri Lankan Prime Minister.

“OMG bomb blasts in SL, God be with all. I just left Cinnamon Grand hotel and it has been bombed. Can’t believe this. Shocking,” she tweeted.

Five persons from Andhra Pradesh’s Anantapur district too had a narrow escape in the serial bomb blasts.

Amilineni Surendra Babu, who heads the SR Construction firm, sustained minor injuries while his friends escaped unhurt when a bomb went off at the Shangri La Hotel in Colombo, where they were staying.

The group, which was on a tour to Sri Lanka, was having breakfast at the hotel when a bomb ripped through the premises.

In the stampede that followed, Surendra Babu sustained minor injuries. The group later moved to a safer place. Some pictures of the injured were posted on the social media.

A police officer in Anantapur district said they did not succeed in contacting the businessmen as the communication network in the island nation was down after the serial blasts.

At least 207 people were killed and 469 injured when eight suicide bombings struck luxury hotels and churches across Sri Lanka, mainly in Colombo, on Easter Sunday in the island’s bloodiest day since the civil war ended a decade ago. (IANS)