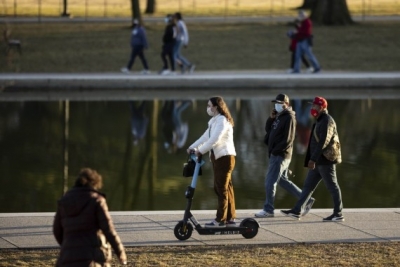 Washington– A White House economic adviser has said that there were now 4.2 million fewer women working than in February 2020, in large part because of the Covid-19 pandemic.

“Millions more women have had to reduce their hours, often because taking care of the children is a responsibility that continues to fall disproportionately on women,” Heather Boushey, member of the Council of Economic Advisers, said at a White House briefing on Wednesday.

“Our economic recovery depends on us addressing the barriers that have hampered women from fully participating in the labour force,” she said.

Boushey noted that the $1.9 trillion relief package recently rolled out “will change the course of the pandemic” and “deliver immediate relief” and support to women, families, and their communities critical to building a more equitable economy.

“We have to do more to close the wage gap and to take steps to ensure that all women, especially women of color, have their shot to get ahead,” Boushey said.

Chair of the Council of Economic Advisers Cecilia Rouse, who also attended the briefing, noted that March 24 is Equal Pay Day, a day that is a symbolic representation of “how far into this year women must work to catch up to what men made in the previous year”.

“The disparities are greater for Black and Hispanic women who earn 63 cents and 55 cents for every dollar that a white man earns,” she added.

The top White House economist said President Joe Biden and Vice President Kamala Harris believe that the Congress should pass the Paycheck Fairness Act, calling it “an important step” towards ending pay discrimination through transparency and accountability for employers.

The Chamber of Commerce, however, opposed the Paycheck Fairness Act.

In a letter to the House Committee on Education and Labor sent on Wednesday, the lobbying group said it would conflate discriminatory practices with other non-discriminatory factors that result in legitimate pay disparities.

The bill, he said, would impose a new multi-factor test that includes a vague “business necessity” test that would effectively eliminate the ability of an employer to make compensation decisions based on such factors.

She noted the administration believes that “we must provide paid family and medical leave, make childcare more affordable, and build pipelines for training that enable women to access higher-paying jobs”, adding that there is still a lot of work to do. (IANS)