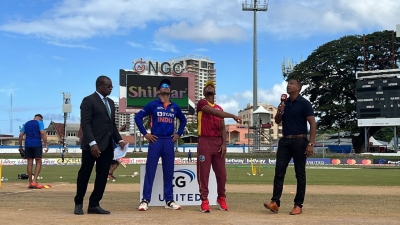 Port of Spain (Trinidad)– India captain Shikhar Dhawan won the toss and opted to bat first against West Indies in the third and final ODI of the three-match series at Queen’s Park Oval, here on Wednesday.

India, who are leading the series 2-0, made one change in their playing XI as Prasidh Krishna came in place of Avesh Khan for this game.

“We will bat first. We would like to post a good score. The best thing is everything is performing, nice to see that. That’s a big positive for us, happy with that. I feel that intent is important, but at the same time you need to be smart,” said Dhawan at the toss.

“Dravid is doing a good job, the more the players will play, the better they will get. We got one change. Prasidh comes in for Avesh Khan,” he added.

On the other hand, West Indies made three changes with Jason Holder, Keemo Paul and Keacy Carty replacing Alzarri Joseph, Rovman Powell and Romario Shepherd for the last game of the series.

“The first two games, we were heartbroken. We are motivated today, we need to get over the line. We spoke about batting 50 overs, but we need to be more consistent. We will get to see the result eventually. Holder, Keemo and Carty are in, Alzarri, Rovman and Shepherd are out,” said West Indies skipper Nicholas Pooran.