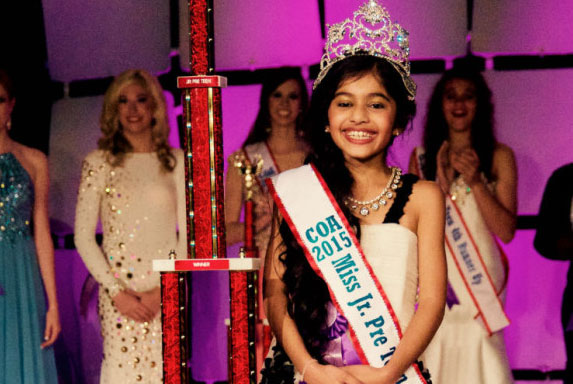 Nine-year-old Bhuva from Shrewsbury, MA, first competed at the state level and won the title ‘Miss Jr. Pre-Teen Boston’ on March 29, 2015. Upon winning this title and crown, she went on to compete at the national level .
“We are so incredibly proud of our daughter. She worked very hard in preparation for these competitions and it’s wonderful to see her win,” said Twinkle Morbia and Gautam Bhuva, parents of Bhuva.

The national competition was held at Rosen Centre Hotel in Orlando, Florida. There were a total 250 contestants in four different categories, out of which there were 37 contestants in Junior Pre-Teen Category.

On the evening of final day of competition on Dec. 13, Bhuva was announced as one of the top 10 contestants in the National Finale.

The competition consisted of three different rounds. The first part of the evaluation was the personal interview. The second round was a ‘Casual Round’, followed by the ‘Formal Round’. During this Finale evening, all the top 10 contestants were ranked by 9 judges. After an unscripted question and answer session for the finalists, Bhuva was named the winner of this pageant competition in her category.