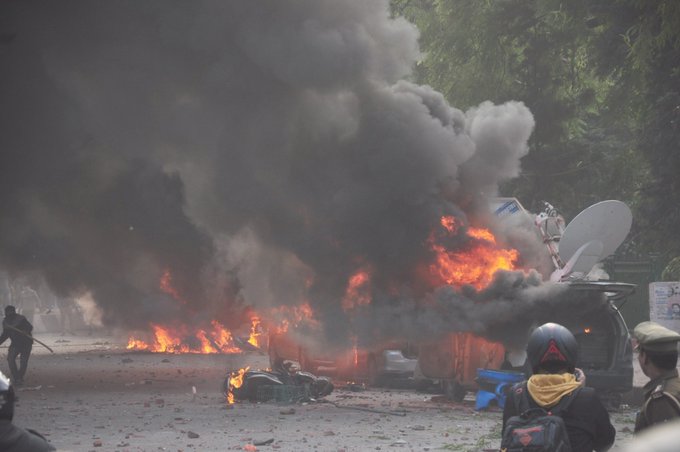 New Delhi–At least three people were killed in Uttar Pradesh’s Lucknow and Karnataka’s Mangaluru as violence broke out during protests against the Citizenship Amendment Act in various places on Thursday. Aiming to bring national and international attention to their fight against the controversial law, protesters from a wide social and political spectrum joined forces as marches and meets were held across the country.

A number of metro rail stations were shut as a precautionary measure. A huge traffic jam was witnessed on NH8, connecting Gurugram to the capital and flight operations from the IGI airport were affected, as apart from passengers, the flight and cabin crew could not reach for duty.

Some of the worst protest-related violence took place In Uttar Pradesh, where media persons were attacked and OB vans were razed in Lucknow. Similar acts of violence and arson were reported from places such as Sambhal in the state, which has a BJP government at the helm.

In Lucknow, a man died allegedly due to a firearm injury that he sustained during the protests. The deceased, according to sources, has been identified as Mohd Wakeel, a resident of Sajjad Bagh in Hussainabad area.

It is not yet clear if he was killed in police firing.

“That is for the forensic experts to decide what kind of bullet took his life. He came here with a bullet injury in the stomach and we tried to save him but he succumbed to the injury,” said a doctor in the Trauma Centre of the King George’s Medical University.

The police maintained a studied silence on the death.

Chief Minister Yogi Adityanath blamed the opposition for the violence.

Authorities have suspended internet services in Lucknow for 45 hours from 3 p.m. on Thursday and in Ghaziabad for 24 hours.

In yet another BJP-ruled state, Karnataka, two deaths were purportedly reported from Mangaluru while protests were by and large peaceful and orderly elsewhere in the state. Prohibitory orders were in place in Bengaluru and other parts of the state from Thursday morning and prominent among those detained by the police in Bengaluru included eminent historian Ramachandra Guha.

Police fired teargas shells and carried out a baton charge to disperse 100 anti-CAA protesters who allegedly turning violent, setting a few motor bikes on fire and pelting stones on security forces in Mangaluru

“Jaleel Kandak, 49, and Naushan Kudroli, 23, who received bullet injuries when the police fired on protesters near the Deputy Commissioner’s office, succumbed to their injuries at a private hospital,” the source told IANS.

Though Mangaluru Police Commissioner P.S. Harsha was yet to officially confirm the deaths, a Muslim cleric told reporters that Kandak and Kudroli were no more. Senior Congress leader Dinesh Gundu Rao also confirmed the deaths in a tweet.

Addressing the media, Harsha said: “About 20 people were injured, including 15 policemen, when protesters threw stones on the police and attempted to set police vehicles on fire.

In West Bengal, where Mamta Banerjee heads the Trinamool government, the protests were a big show of strength for the ruling party which has been fiercely opposing the CAA. Banerjee fuelled the controversy by demanding a UN-monitored referendum on the law. The statements have come for sharp criticism from the BJP, while Governor Jagdeep Dhankhar appealed to her to withdraw the comment.

Maharashtra also witnessed protests in Mumbai and several other places in the state.

Nagpur, which is the headquarters of the RSS, also witnessed a big protest march by citizens’ groups.

Other places that saw anti-CAA protests include Rajasthan, Chennai and Thiruvananthapuram.

In Rajasthan, protests were held in several districts including the capital city Jaipur where thousands belonging to the Left parties, lawyers fraternity, CIPU, People’s Union for Civil Liberties (PUCL), civil society, teachers, professors and many other organisations came together to take out a massive protest march against the Citizenship Amendment Act.

However, the protests drew a mixed response in Bihar and were largely muted in Madhya Pradesh. Some protests were also reported from Uttarakhand and Jharkhand – a day before the last of the five-phased assembly polls on Saturday.

Protests in Hyderabad were foiled by the Telangana Police who whisked away the protesters. (IANS)