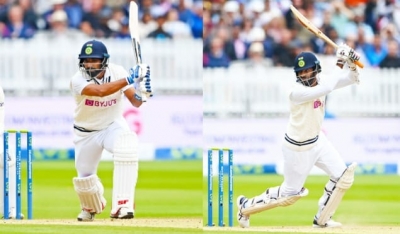 London– India declared their second innings at 298/8 just after lunch on the fifth and final day of the second Test leaving England a target of 272 to win in 60 overs.

Pace bowlers Mohammed Shami (56 not out) and Jasprit Bumrah (34 not out) added unbeaten 89 for the ninth wicket, the highest stand for the wicket in England by an Indian pair — surpassing the 66 between Madan Lal and Kapil Dev in 1982, to help India wrest initiative.
India had lost the wicket of Rishabh Pant early, the left-handed wicketkeeper-batsman falling for 22. Ishant Sharma followed soon after.

However, Shami and Bumrah got together and 89 in exactly 20 overs to tilt the balance in India’s favour. The two had shared five zero-run partnerships out of the last nine partnerships prior to this one.