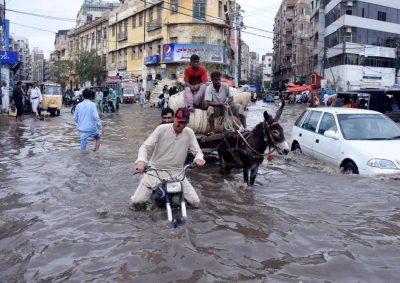 Islamabad– The toll in Pakistan’s southern port city of Karachi from the latest spell of monsoon rains which started last week went up to around 20, rescue workers and local media reported.

At least six people were killed in different rain-related incidents during the last 24 hours in the city, rescue workers told Xinhua on Monday evening.

Three people had lost their lives due to electrocution in separate accidents, including two people who were riding on a motorbike, rescue workers said.

Two people in a car had drowned after a strong wave of water took the car into a drainage canal while in another incident a child lost his life after getting drowned, rescue workers said, adding that the deceased bodies had not been found yet.

Karachi, the capital of southern Sindh province and the financial hub of the country, is currently in a state of urban flooding due to a heavy spell of rainfall, Xinhua news agency reported.

The rains that started Sunday evening continued to pour till Monday afternoon, leaving several parts of the city submerged while main roads inundated.

Sardar Sarfaraz, Karachi Chief Meteorologist, told Xinhua that the received rainfall of the 18 rain gauges installed in the city has varied from 52 mm to 342.4 mm during the recent spell with an average of 115.6 mm.

“The usual weather patterns had been disrupted in greater South Asian region due to climate change, which caused sometimes more than usual rains resulting in floods and sometimes deficient rains leading to drought,” he said.

He said that the heavier part of the spell was over while light and moderate rain is expected over the next couple of days.

According to Sarfaraz, another strong monsoon low-pressure system, however, is likely to approach Sindh by Thursday and would continue for the next few days, “which again can produce very heavy rains that may trigger urban flooding like situation in Karachi.”

Pakistani Prime Minister Shehbaz Sharif has directed the provincial government and the National Disaster Management Authority (NDMA) to make coordinated efforts to ensure public safety and relocation of the people affected by rain.

Currently, different parts of Pakistan are suffering from strong floods due to monsoon rains, especially the southwest Balochistan province.

Ninety-seven people were killed and 101 others injured in separate rain-related accidents across the country over the last three weeks, the NDMA reported last week. (IANS)