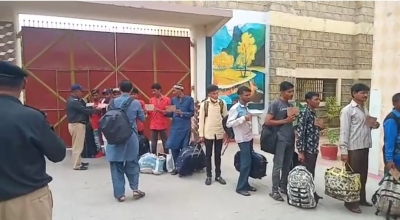 Karachi– Twenty Indian fishermen were released from the Malir District Jail, Karachi, and were sent to Lahore by bus from where they will be handed over to Indian authorities through the Wagah border.

Their travel expenses were borne by the Edhi Foundation, and they were also given clothes, ration, essentials and cash as gifts as well, The Express Tribune reported.

They had been arrested for violating maritime boundaries and were released after completion of their sentences.

Malir District Jail Senior Superintendent Muhammad Arshad said that when the Indian fishermen were arrested and transferred to the jail, they were provided all facilities as per the prevailing laws.

Prisoners were treated with leniency, while consular access was granted for their release, The Express Tribune quoted Arshad as saying.

After receiving all the evidence and proof, the stages of their release were completed by the Home Department and they were released from jail on Sunday morning.

Saad Edhi was present in the jail on behalf of the Edhi Foundation and supervised all the affairs. (IANS)