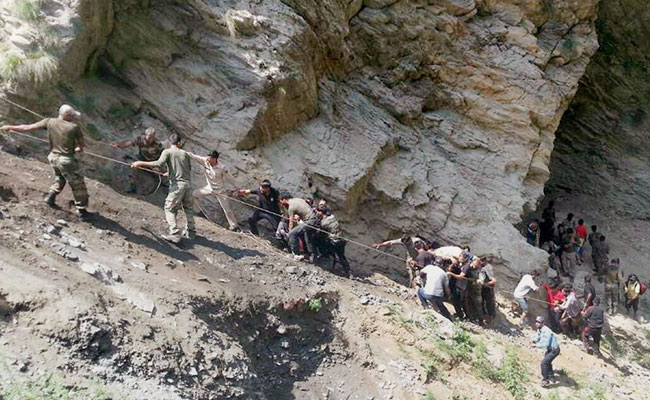 Jammu– Sixteen Amarnath pilgrims were killed and 26 seriously injured when the bus in which they were travelling plunged into a gorge in Jammu and Kashmir’s Ramban district on Sunday, authorities said.

The Jammu and Kashmir State Road Transport Corp bus was on its way from Jammu to the Kashmir Valley when the driver reportedly lost control over the vehicle at Nichnala near Banihal town on the Jammu-Srinagar highway.

“Sixteen pilgrims were killed on the spot while 26 others have been injured,” a police officer said. The deceased comprised 14 men and two women.

Of the injured, five were taken to Srinagar, 19 others airlifted to the Government Medical College Super Speciality Hospital in Jammu, and two were being treated in Banihal hospital.

The spokesman said the bus carried 43 persons including the driver.

Army, police and paramilitary forces launched a rescue operation which was joined by locals, who helped to take out the injured pilgrims from the wreckage site.

Modi said: “Extremely pained by the loss of lives of Amarnath yatris… My thoughts are with the families of the deceased. I pray that those injured recover soon.”

Rajnath Singh said he spoke to Mehbooba Mufti regarding the accident. She apprised him about the rescue operations.

“My heart goes out to the families of the Amarnath yatris who lost their loved ones in the bus accident. My prayers are with the injured,” he added.

This is the second tragedy to hit the Amarnath pilgrimage since militants ambushed a bus on July 10, killing eight people.

The Amarnath hill shrine, dedicated to Lord Shiva, is located more than 3,800 meters above sea level in Anantnag district.