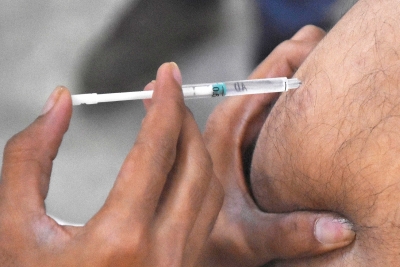 New Delhi– A vaccine, used to treat tuberculosis since the last 100 years, may help prevent the risk of Covid-19 infections in older adults, according to a study by the Indian Medical Research Council (ICMR).

Bacillus Calmette-Guerin (BCG) is considered to be one of the most broadly used vaccines in the world, with around 130 million infants receiving this vaccine every year. There is improved interest in BCG vaccination of elderly population, especially in countries with a high number of reported Covid-19 cases.

The new study, published in the journal Science Advances, suggests that BCG could potentially act to inhibit the biomarkers of inflammation by the immune cells in the blood.

Further, the study also reports that the recent BCG vaccination was not associated with hyperinflammation but was, in turn, associated with down-modulated basal inflammatory status, which might play a protective role in elderly population against inflammatory diseases.

In addition, it is quite possible that pathogen-specific immune responses are not affected by BCG vaccination or, in contrast, actually enhanced, the researchers said.

Apart from a variety of proinflammatory cytokines, which could possibly play a detrimental role in Covid-19, anti-inflammatory responses including IL-10 and IL-33 — implicated in Covid-19 disease severity — were also decreased in vaccinated individuals.

The study also acknowledged certain limitations such as the lack of a placebo control group (only unvaccinated controls at baseline).

Further understanding of the results may support the vaccine efficacy and explore innovative applications of BCG vaccination, the team said. (IANS)