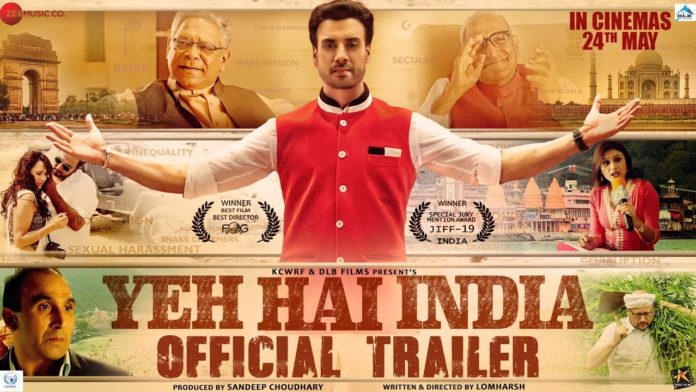 A patriotic fever seems to have gripped the country big time with filmmakers trying to bring about winds of change.

Writer-director Lom Harsh’s “Yeh Hai India”, is a mission film. A mission to change the perception of the country from the various negative tags it holds.

The film follows the journey of NRI Mithilesh Kumar aka Mickey. Born and brought up in London, Mikki decides to come to India to educate himself about the country of his origin and prove that there is more to it than meets the eye.

In India, he learns about the ‘Beggar Mafia’, ‘Human Trafficking Mafia’ and the ‘Land Mafia’ and many more facets that are contrary to what he has been fed since childhood. But self-motivated, he decides to alter this image. He goes on an image sprucing spree, telling the media to change, so that the country improves.

The intention of the writer-director appears to be sincere, but naive. Sans a plot and no notion of causality, the narrative is a compilation of events that take place without any cause and effect and even if they do, it is purely by force. The writing is extremely weak. So what you see are a few disjointed episodes compiled together to give a semblance of a well-intended narrative.

On the performance front, Gavie Chahal who was earlier seen in Salman Khan-starrers “Ek Tha Tiger” and “Tiger Zinda Hai”, plays the lead Micky. He is sincere, but lacks on-screen energy. He is aptly supported by Deana Uppal as his love interest Jenny.

Ashutosh Kaushik as Micky’s friend Pandit is natural and relatable. He is never out of his comfort zone and at times he does seem to be a bit over the top.

In a lacklustre, stereotypical role, Mohan Joshi as the Tourism Minister is wasted. Lom Harsh plays his spoilt son Yash, who is the antagonist. He fails to create an impression simply because his character is poorly designed and also because he lacks screen presence.

With moderate production values and tacky mounting, cinematographer Balaji V. Rangha’s frames capture the drama befitting a television broadcast. The visuals are accompanied by Raja Hassan’s background score. The music is a sure plus in the film. The songs mesh seamlessly into the narrative but are lost due to the poor directorial quality of the film.

Overall, if bitter pills are supposed to cure you of your maladies, “Yeh Hai India” is one such bitter pill that will leave you feeling worse after watching it. (IANS