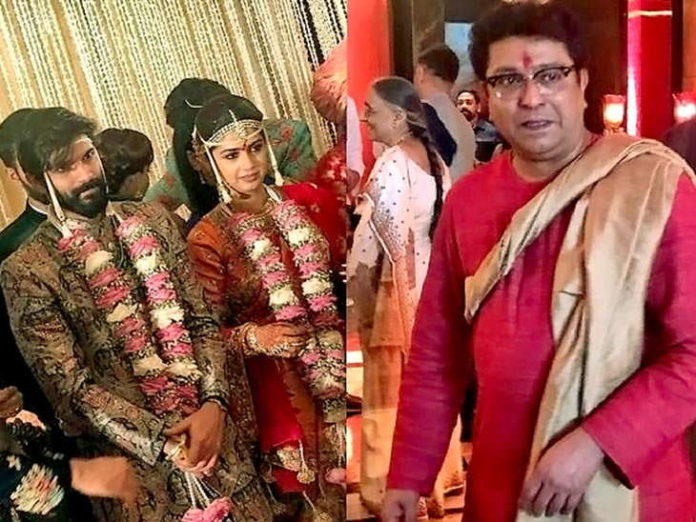 At the mega-wedding reception this evening organised at a five-star hotel in Lower Parel, Mumbai, by the family, a large number of celebrities were in attendance.

Earlier, this afternoon, the grand marriage was attended by the who’s who of politics, corporate world, film industry, sports, glamour and, of course, close family members at a five-star hotel.

Raj and his wife, Sharmila, were seen warmly greeting guests who included his cousin and Shiv Sena President Uddhav Thackeray, wife Rashmi and their son Aditya, another cousin brother Jaidev Thackeray and his family members, and others of the Thackeray clan.

Incidentally, Amit, a cartoonist, and Mitali, a fashion designer — both childhood friends — were betrothed on December 11, 2017, which happens to be the wedding anniversary of Raj and Sharmila.

Senior Congress leader Ahmed Patel, who is a close aide of Sonia Gandhi and Rahul Gandhi, was also there to bless the young couple.

Sporting a typical Maharashtrian attire was Bharat Ratna and cricket icon Sachin Tendulkar, along with his wife, and also renowned singer Asha Bhosle.

Raj’s daughter Urvashi and his daughter-in-law Mitali had some time ago launched their own fashion label, “The Rack”.