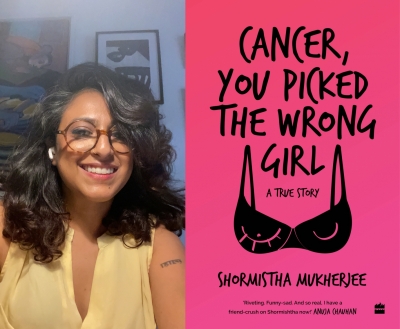 New Delhi– When Shormistha Mukherjee, whose Linkedin profile describes her as a storyteller, creative strategist, problem solver, connection maker, team builder and entrepreneur, was diagnosed with cancer, she kept wondering why people were so awkward around her.

Then she realised it was because they didn’t know what to say because in India, “we don’t talk about cancer, we just neatly sidestep it like dog poo on a pavement”.

But Mukherjee was made of sterner stuff. Aided by a husband beyond compare, Anirban, a host of friends, principally Oindrilla (Oinx) and Ziba, three doctors at Kokilaben Hospital (among many other caregivers) and her parents, she not only survived breast cancer — and even sorted a midlife crisis — but emerged from the experience roaring to write a book about what she had gone through.

The outcome: “Cancer, You Picked The Wrong Girl” (HarperCollins).

“Not just the mastectomy, reconstruction, chemo, hair loss, but also the mental see-saw, the loss of dignity, the constipation, the hot flashes. To write about it, was to face up to it. It was the most life altering thing to happen to me, but it also had its moments of humour and lightness. And I want anyone, who god forbid, has to go through this, or a caregiver, or a friend or even a reader who is too scared to say the word cancer, I want them to find hope in this book, and of course snort out their tea in laughter,” she says.

Like, for instance, when during chemotherapy she felt she looked like “a baby hedgehog with a swollen face”.

Or, when she’s buying things at a fancy store “with my bald head and my mask, and a lady just keeps staring at me…So, finally, I walk up to her, lower my mask, and in a loud whisper announce ‘I have cancer’. She left the shop faster than you can say bhindi,” Mukherjee writes.

“I don’t know what is with their fascination for doing everything at that unearthly hour. So, my IV was put in at 6 a.m. My catheter was taken out at 6 a.m. My first medicine was given at 6 a.m. Oh my god. Just stop. Let the patient sleep. All that’s needed is a roll call parade, so you feel like you’re in jail,” Mukherjee writes.

“When I look back,” she writes, “I realise the one person who saw me through everything was of course Anirban. But it wasn’t just seeing me through, it was like we both lived it. In the hospital, I’d be all happy and chirpy all day, and then before I slept something would trigger a meltdown. Some days I would be feeling scared, some days I would be wanting to just go home. And every night, Anirban would hold me and we’d both cry.”

The nine months from diagnosis, through the surgery, the chemotherapy and the radiation therapy “also released me”, Mukherjee writes.

“It was like a blank slate, we were starting all over again…It’s not easy being married. And we got married when we were kids. Twenty-two and twenty-three (Mukherjee was 45 at the time of surgery). But let me also tell you, that sometimes it takes cancer to tell you that this is the person you want to grow old with. This is the only person who truly gets you,” Mukherjee writes.

“It taught me how much I was loved. By my parents, who put their lives on hold so they could be there for me. They’d literally fly down (from Delhi to Mumbai) before every chemo, wait till I felt better and then go back, and then do this all over again. They lived out of suitcases for that entire period. Only so I could be looked after, and yet have my space. As my chemo progressed, they also learnt to deal with it. There were days when we’d laugh, they’d take me for long drives in the rain, they’d cook my favourite food. It was always going to be hard watching their daughter (their only child) go through this,” Mukherjee writes.

Then there were her friends, Oinx, “who cancelled her holiday abroad. Ziba, who can never wake up early, came for every early morning appointment. My friends and partners at work, Parag and Dixit, who for nine months did their share of work, and mine too. It was bloody hard for them, especially since one day I was at work and in their lives, and the next day I was gone. But they never said one thing to me except ‘All you have to do is beat this’,” Mukherjee writes.

There was also the realisation that as her physical struggle with the chemo reduced, “my fight with my mind became more serious. And I think in the end that’s what made me stronger. I was never in a fight with my body, it was always my mind that I had to control.”

“I was dealing with all this, when another bolt from the blue hit me. My periods stopped. Just after my second chemo, I kept waiting for my period to knock on my fallopian doors, and all I got was some stray spots of blood. Now, nobody tells you this stuff, Not your doctors, nurses, no one. Maybe they’re pretty sure people will Google this.”

Not Mukherjee, who was made of sterner stuff. She called her chemo doctor, who coolly informed her: “Yes, in most people, the chemo does stop her periods.”

Will they come back after the chemo is over, she asked.

“Sometimes they do and sometimes they don’t. There is no fixed time period. You are forty-five. They might not come back and you might have forced menopause,” the doctor said.

“Menopause. Now I also have menopause to deal with. Just like that, with no warning,” Mukherjee writes.

What a time for a midlife crisis to strike!

“Ooh boy. So much unbidden stuff rushed into my head. Menopause means I am now old. Off the shelf. In a dusty, dowdy little corner. How could that be? I was fit and slim and beautiful a couple of months back. And now you tell me I’m over the hill, and past my prime,” Mukherjee writes.

And today, “guess what, menopause is just fine. Sweaty suits me, adds a sheen to my face. For too long, this shit has been kept under wraps. I’m not past my prime or off the shelf or a ‘poor thing’. I’m just getting older, and that’s fine. I can still do everything I want, without some eggs getting in the way.

“Wait a minute. It took cancer to sort out a midlife crisis! Damn, next time, universe, just deal me a sports car or something,” Mukherjee concludes on a jocular high. (IANS)