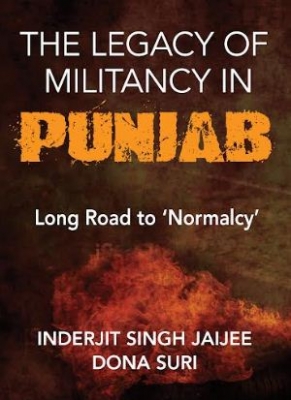 The average man, particularly the average young man, or woman, may have trouble articulating their situation, but they know what they are experiencing: stagnant economy, deep trouble in agriculture, symptomised by an appalling number of rural suicides every year, collapse of industry, no jobs and no hope of jobs, a state government that in fact has no money and falls deeper into debt with every passing year.

[A] report by Common Cause points towards an ingrained distrust of the police and by extension, the government. Some people may be able to identify a year or a period when this distrust took root; for others, it is just a ‘given’ that they grew up with.

Militancy itself was a symptom of a long-standing sense of alienation. The state’s response drove that alienation deeper. Ruthless measures employed to crush it perverted the administrative culture, particularly police culture. The courts were paralysed for 20 years.

Industry was always denied to Punjab on the pretext that the state was vulnerable to attack, and, in recent years, tax-holiday packages granted to neighbouring states have drained away industry and jobs. Traditionally, Punjab has been an agricultural state; but, if any hope remained in agriculture, then farmers and farm labourers would not be committing suicide.

Successive state governments have come in on big talk but, either because of indifference or inability, all the indicators show the state on a downward path. Parties woo the voters with solemn oaths to provide corruption-free and efficient governance; they promise to rescue agriculture and revive the villages; they commit to attracting industry and creating jobs.

If the claims are to be believed, would lakhs of young people and their parents make such a heroic effort to get out of Punjab, get out of India? It must also be pointed out that the politicians of Punjab send their own children abroad, which strongly suggests that they do not believe what they say either.

‘It Can’t be Worse There’

The motivations of those desperate to leave Punjab are largely economic, but not only economic. Another thing that drives them to risk everything to get out of Punjab is the belief that there is absolutely nothing that they can do to change a corrupt administration, a rapacious police force, and a selfish, static, unresponsive political culture.

A story in ‘The Indian Express’ of March 3, 2018, quotes a youngster from a village in Gurdaspur district:

He has studied up to Class 10 and wants to “get out of here”. He says, “I don’t believe Greece can be worse than Punjab. The agent has told me that there is always work for those who are willing to work hard. I am. At least I can go out and see the world.”

Within a decade or two, most of the generation that witnessed events of the 1980s and 1990s will be gone.

Some of that generation were sufficiently alienated from the government to get into a war with it. They were not alienated from home and faith, so fighting still seemed worthwhile. Very few of their children and grandchildren have much awareness of, or interest in, the traumas suffered by the preceding generation. They see so little hope in their homeland that fighting does not seem worthwhile; they simply leave.

If militancy was a symptom of alienation, then the present generation is even more alienated than their elders were. Legacies do not always have to be recognised or articulated to endure.

(Excerpted with permission from SAGE Publications India from the book The Legacy of Militancy in Punjab: Long Road to ‘Normalcy’ by Inderjit Singh Jaijee and Dona Suri) (IANS)