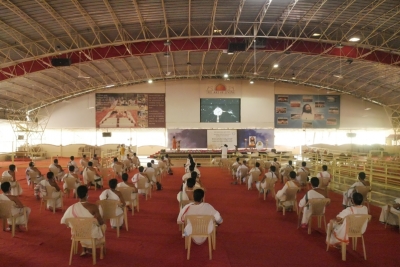 Bengaluru–Nearly 100 teachers and scholars on Sunday called for preserving the hoary oral tradition of reciting the Vedas and the Shastras.

“As Vedas encompass science and knowledge, the power of chanting them takes away calamities, violence and other negative influences to create harmony and friendliness in everyone’s hearts,” said Art of Living’s (AOL) Veda Pathshala Principal, Vishwajeet Chinamani Gokarna Ghanapathi here.

Inaugurating the second Karnataka Veda Vidwat Sammelan at AOL’s international centre here, he said the oral tradition of Vedic mantras preserved the four Vedas and their branches over the centuries.

Composed in Vedic Sanskrit, the four Vedas — Rigveda, Yajurveda, Samaveda and Atharvaveda are the oldest scriptures of Hinduism and Indian literature.

“The Prayanam initiative is to ensure the oral Vedic tradition is not lost, as the vibrations of the chants will help increase prosperity and bring peace in society,” said Ghanapathi.

Maharishi Sandipani Veda Vidya Pratishthan Principal Sandipani said during the Vedic era, there were nearly 1,130 shakhas (stanzas), including 21 in Rigveda, 100 in Yajurveda, 1,000 in Samaveda and nine in Atharvaveda.

“Unfortunately, we lost the tradition of the most shakhas barring 9-10 of them… the most precious words of our heritage,” he said.

The 100 Vedic scholars are from Mysuru and Bengaluru as well as Gokarna, Swarnavalli, Honnavar in the state. (IANS)