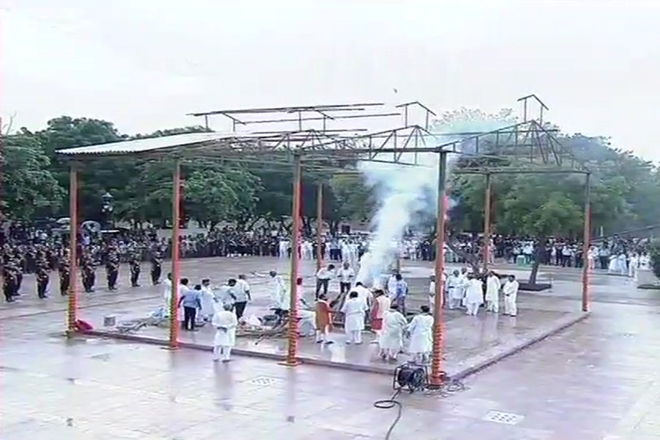 New Delhi– Former Prime Minister Atal Bihari Vajpayee, who passed away here at AIIMS on Thursday at age 93, was on Friday cremated with full military honours at Rashtriya Smriti Sthal, where people turned out in tens of thousands to pay their final tributes.

Vajpayee’s foster-daughter Namita lit the funeral pyre amidst the chanting of vedic hymns and firing of a 21-gun salute by soldiers.

In keeping with the military honours, three service chiefs placed wreaths on the body of Vajpayee before leaders paid their floral tributes.

The tricolour that was wrapped around Vajpayee’s body was removed and given to his foster granddaughter Niharika after which the body was handed over to the family for last rites.

A few thousand people, some of whom chanted slogans hailing the late leader, thronged the Smriti Sthal as the last rites took place.

Earlier, tens of thousands of commoners joined Modi and BJP President Amit Shah in the final journey to bid adieu to Vajpayee as the former Prime Minister’s body was being taken to Rashtriya Smriti Sthal.

Vajpayee, who passed away at AIIMS on Thursday evening, had a pan-India appeal and his flair for foreign policy and initiatives were acknowledged globally.

The country observed a seven-day state mourning as a mark of respect for the leader was decorated with Bharat Ratna and was very popular. The tricolour is flying half-staff. (IANS)