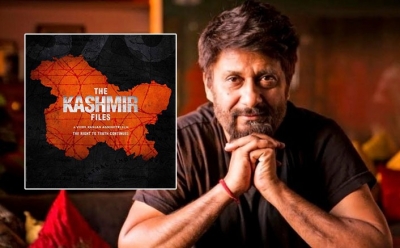 New Delhi– ‘The Kashmir Files, an upcoming movie by noted filmmaker Vivek Agnihotri, is a landmark film depicting the gruesome genocide of hundreds of thousands of indigenous Kashmiri Hindus in 1990.

The Global Kashmiri Pandit Diaspora (GKPD) has been at the forefront of making the world aware of the trauma faced by the Kashmiri Hindu community and the intergenerational effects of the genocide.

The broad outline of the movie was conceptualised by GKPD in association with I Am Buddha Foundation in early 2018. This culminated in a two-year ‘research tour’ undertaken by Vivek Agnihotri, director, and Pallavi Joshi, producer, whereby they travelled widely across India, the US, the UK and Singapore to hear first-hand accounts of the brutalities faced by the community from the survivors. These stories form the backdrop of this well-researched movie.

The movie also aims to increase awareness among the international communities about the scourge of terrorism and the need for it to be uprooted globally so that peace and humanity can flourish. It depicts the humanitarian angle of the challenges that global terrorism brings to communities and the sufferings it causes.

To kick-start the worldwide release of the movie, a US wide promotional tour — ‘The Right to Justice Tour’ — was organised by GKPD in collaboration with its various partners in the US representing several sections of the Indian community from November 26 to December 30, 2021.

All the exclusive screenings were held at premier theatres across the US and were sold out within hours of the events being made public. An invited audience of American politicians, lawmakers, media personalities, noted members of the Indo-American, Jewish and other communities attended in wide numbers.

Hundreds of audience members took to social media and local press after the viewing to express their gratitude to Agnihotri and his team for finally bringing out the honest trust about the genocide, which has hitherto remained hidden from the masses.

Acclaimed actor Mithun Chakraborty, who has a lead role in the movie, attended the Long Island screening and spoke very poignantly about his experience during the filming. Other noted actors, Anupam Kher, Pallavi Joshi, Puneet Issar and Darshan Kumaar, are part of the star-studded cast.

On the sidelines of the screenings, various impact events were held at prestigious venues across the US, notably the Holocaust Museum in Washington DC, Capitol Hill, Harvard Club Boston, University of Massachusetts, University of Denver, Georgia Tech and the Meca Center Houston.

GKPD in partnership with US-India Security Council convened a congressional reception at Capitol Hill on December 2 where Congressman Andy Barr emphasised the contribution of Indo-Americans.

Noted Indian-American Congressman Raja Krishnammorthi said that “the Kashmiri pandit community is one of the most successful Indian-American communities and the challenges they had faced and overcome in the past make all challenges pale in comparison”.

In his keynote speech, Agnihotri said, “The first principle of humanity and oneness comes from Kashmir.”

During the tour, Governor of the state of Rhode Island, Daniel J McKee, presented a certificate of special recognition to Agnihotri and Pallavi Joshi. The state Senate of Massachusetts also formally congratulated Agnihotri for his contribution to the Indian film industry.

The grand finale of the roadshow was held in Houston on December 30. A massive car rally was organised and the visiting guests were driven in a motor cavalcade to the screening theatre. More than 400 people, including lawmakers, community leaders and members of think-tanks, attended the screening.

At the screening, Surinder Kaul, chief organiser of the tour and GKPD co-founder, thanked the visiting guests for making this very impactful movie and their extraordinary commitment towards bringing the truth out.

‘The Kashmir Files’ is due for worldwide release soon. (IANS)