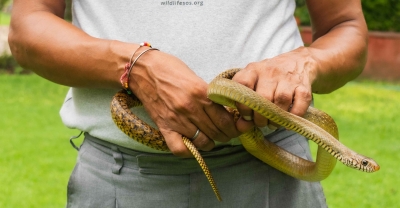 Shahjahanpur (Uttar Pradesh)– In a bizarre accident, a man shooting a video with a snake, died in Uttar Pradesh’s Shahjahanpur district after he was allegedly bitten by the reptile.

The victim identified as Devendra Mishra was also a former village head of Maruajhala village.

Mishra was popular in the area for rescuing snakes and had caught more than 200 snakes in the village in the past. The snake with which he was allegedly shooting the video, was caught from his neighbour Ravindra Kumar’s house.

An eyewitness said that after catching the snake, believed to be the highly venomous Common krait, Mishra had “started showing off and went around the village with the snake wrapped around his neck”.

In the alleged video, he is also seen putting the snake around the neck of a five-year-old girl as well.

Mishra was bitten by the snake nearly an hour after he caught it.

He tried to treat himself with various herbs but subsequently succumbed to the poison.

Meanwhile, the snake, which was kept under a utensil by Mishra, was also found dead a few hours later. (IANS)