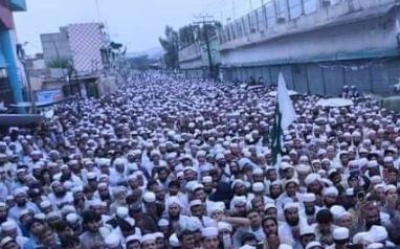 Islamabad–On the call of a local ulema, a large number of people, mostly clerics and seminary students, held a demonstration in Bannu city of Khyber Pakhtunkhwa province in Pakistan to press the local administration to close down the citys family park, media reports said.

Before the protest, a meeting was held at a local mosque chaired by head of ulema committee, Maulana Abdul Ghaffar, Dawn reported.

Later, the participants took out a procession, which passed through different markets and converged near the press club building.

The administration had deployed a large contingent of police at the park and along the procession route to avert any untoward incident.

The protest leaders alleged that the establishment of the family park has promoted obscenity in the area. They said women visiting recreational places is not acceptable to them, and asked the local administration to close down the park, Dawn reported. (IANS)

WHO warns of worsening humanitarian situation in flood-ravaged Pakistan