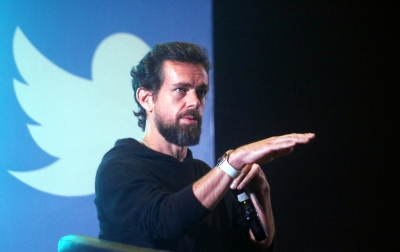 New Delhi– Amid the brouhaha over Twitter and farmers’ issue, its CEO Jack Dorsey on Thursday “liked” a Tweet asking for an emoji for the hashtag #FarmersProtests.

Dorsey liked a Tweet which said: “Now is as a good time as ever for @Twitter and @Jack to add a Twitter emoji to the massive #FarmersProtests in India – as they did for historic international protests like #BlackLivesMatter and #EndSars”.

In a clear attempt to polarise India, US Vice President Kamala Harris’ niece Meena Harris and some international celebrities with hardly any expertise on Indian affairs, on Wednesday extended their support to the Indian protesters agitating against the new farm laws.

The government in a strong reaction described them as part of “vested interest groups” and their support as “sensationalist social media hashtags and comments” which are “neither accurate nor responsible.”

A Twitter frenzy broke out on Wednesday when American pop singer Rihanna posted a news link on India’s farmers’ protest and tweeted, “why aren’t we talking about this?!” It triggered widespread outrage from Indians questioning Rihanna’s credentials and knowledge about India’s internal matters.

This was followed by Greta Thunberg, the celebrity teenager famous for her environmental activism, tweeting, “We stand in solidarity with the #FarmersProtest in India.”

Lebanese-American former pornographic actress Mia Khalifa also joined the bandwagon by posting a picture of Indian women protesters with a comment, “What in the human rights violations is going on?! They cut the internet around New Delhi?! #FarmersProtest”

While their tweets got hundreds of likes and retweets from around the world, thousands of Indians including Indian film star Kangana Ranaut trolled all of them. (IANS)