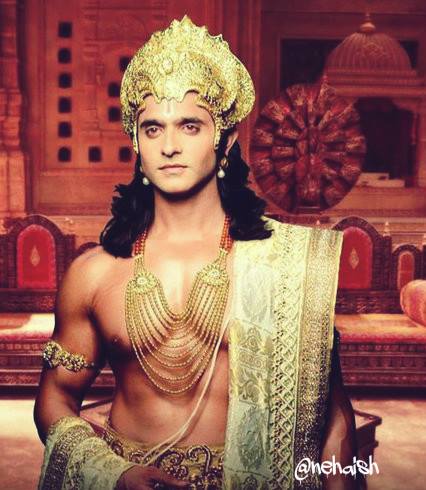 Mumbai–Actor Ashish Sharma, who is currently playing the role of Ram in popular mythological show “Siya Ke Ram”, is mentoring the show’s new entrant Danish Akhtar, a real life wrestler, for the role of Hanuman.

Ashish, who has previously starred in shows like “Chandragupta Maurya”, “Rab Se Sohna Isshq” and “Rangrasiya”, used to play Hanuman’s role in his community’s Ramleela back in Jaipur.

So, he is helping Danish, who is making his acting debut with the show, to play the role of Hanuman to the tee. “I am personally a bhakt (devotee) of Bajrangbali (Hanuman) and have played the role of Hanuman about seven to eight times, due to which I identify with the character very well. He was Ram’s biggest bhakt who never let anything happen to him and Sita,” Ashish said in a statement.

“As for Danish, he has made a drastic career change; that from being a wrestler to an actor, so I told Nikhil Sinha (director of ‘Siya Ke Ram’) that I will personally help Danish prepare to be like Hanuman by explaining him the intricacies of the character,” he added.

Mouni Roy gets pranked by Jay Bhanushali on ‘Khatron Ke…’

Here, Mouni, who is currently a part of mystical TV show “Naagin”, shares that she is scared of snakes in real life. Taking advantage of this situation, Jay along with the actor and the show’s host Arjun Kapoor will play a prank on her.

“Since we were at ‘Khatron Ke Khiladi’ grand finale, I felt like doing some ‘keeda’ by joining Jay in his prank. At that moment, Mouni’s expression was worth seeing, she was scared like a baby and I am sure it gave her some solid goosebumps,” Arjun said in a statement.

The “Hate Story 2” star will tease Mouni by saying that her relatives have come straight from Argentina to meet her. But the reference is to snakes placed in a box next to her.

“Monaz will be seen as a glamorous Marathi girl in the upcoming episodes of the show. She will claim to be Nathu’s (Ali Asgar) wife and will try to seduce him,” a source said.

The actress says she is excited for her entry in the SAB channel’s show.

“I am extremely excited for my entry. This is the first time that I am playing a Marathi girl and will be wearing a Nauvari sari. I have worked with Optimystix before so it’s like a home to me and currently I am doing a play named ‘Dil Toh Bachcha Hai Ji’ with Ali.”

Suryakumar has taken his game a notch higher every time I...