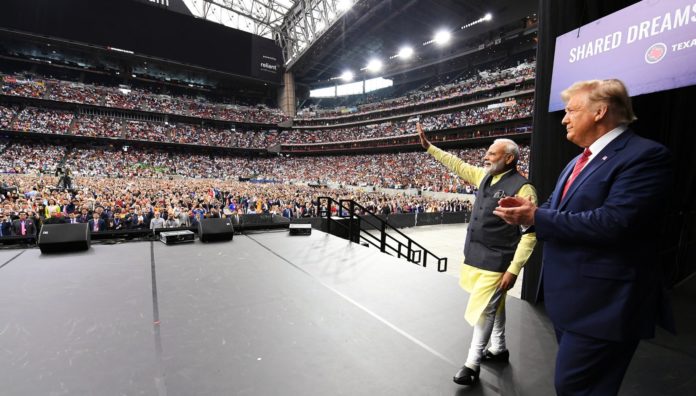 New York– With an eye on next year’s elections, US President Donald Trump tried at the ‘Howdy Modi!’ rally to reset the optics for his campaign among immigrants – a group among whom he has fared badly because of the broad brush accusation of being anti-immigrant.

Unlike his ‘Make America Great Again’ (MAGA) rallies for his re-election campaign where the audience is predominantly white, he was on Sunday in the midst of about 50,000 brown people – a striking visual contrast – at Houston’s NRG stadium.

And it was broadcast live nationally by some channels.

His address was like his usual stump speeches proclaiming his tax cuts, low unemployment, strong economy and border security – except for the omission of partisan attacks on the Democratic opponents and the addition of elements specific to India.

Another huge difference was that Trump, who likes to be the centre of the universe, was not the main speaker at the rally for Prime Minister Narendra Modi.

The New York Times said he was playing a “second fiddle” and The Washington Post “an unusual role of warm-up act”.

It was also the biggest crowd he has addressed during his campaign, though short of the 70,000 he had said that would be there, a number beyond the stadium’s capacity.

The optics and crowd size appeared to be his main motivations to take the unprecedented step of attending a large ethnic rally for a foreign leader. In recent memory, no President has done this – and possibly never.

“The Prime Minister of India has asked me to make a speech and I will make a speech in a stadium loaded up with something like 70,000 people or whatever the maximum is,” Trump said before leaving for the rally.

And probably unprecedented was also the presence of a large number of Democrats among the about 60 elected officials, including Governors, Senators and Representatives, who were on the stage before him.

For them too, the large crowd of Indians, many coming to Houston from their scattered constituencies across the nation was a draw.

The rally was an opportunity for Trump to present himself as a supporter of legal immigrants, while opposing illegal immigration, a distinction that has been erased by the media and his political opponents to make him appear an anti-immigrant racist.

“We are proud to have you as Americans,” Trump said, praising the Indian diaspora for accepting American values.

Holding them out as the kind of immigrants he would like for America, he mentioned their contributions especially to medicine, technology and job creation through entrepreneurship.

“Indian-Americans are writing the story of American greatness,” he added.

According to the Pew Research Centre, the nearly four million people of Indian descent are the highest earning ethnic group in the US, with a median income of $100,000, almost double that of the national median, and with 72 per cent having at least a bachelor’s degree.

Trump emhasised the difference between legal and illegal immigrants to scattered applause.

“We proudly fight for our citizens,” he said apparently referring also to Modi.

Trump said that he was against free benefits to those who enter the US illegally and added that he was going take care of the Indian-American citizens first – with emphasis on “citizens”.

Speaking about his focus on tightening the borders, he said: “Border security is vital to India – we understand that.”

While the media and Democrats have have cast him as a racist opponent of immigrants because of Trump’s comments about criminal illegal immigrants, his demand for a border wall and his administration detaining illegal border-crossers and tightening the conditions for seeking asylum, in reality his stand is more nuanced with a distinction between law-abiding legal immigrants and illegal immigrants.

The rally gave him a stage to broadcast his welcome to legal immigrants.

Indian professionals now wait as long as 10 years for a green card that gives them permanent immigrant status.

Trump has proposed an immigration system similar to that of Canada and Australia that would favour professionals and the educated that would benefit Indians waiting to immigrate.

Whether his overtures to Indians – and through them to other immigrants – would make difference is another matter.

According to the Asian and Pacific Islander Vote survey, 82 per cent of Indian-Americans chose Democrat Hillary Clinton, while only 9 per cent were for Trump in the 2016 election.

Trump’s outreach to Indian-Americans by attending a rally of Hindu Republicans before the election did not seem to have made a difference.

In the US, a religion-based and ethnicity-based campaign is an accepted practice and that was the first time a presidential candidate had come to a rally of Hindus.

While they make up only about 1 per cent of the US population, Indian-Americans are outsize political donors.

According to another research, Indian-Americans have contributed $1 million to Trump re-election campaign and $2 million to various Democrats fighting for their party’ presidential nomination. (IANS)