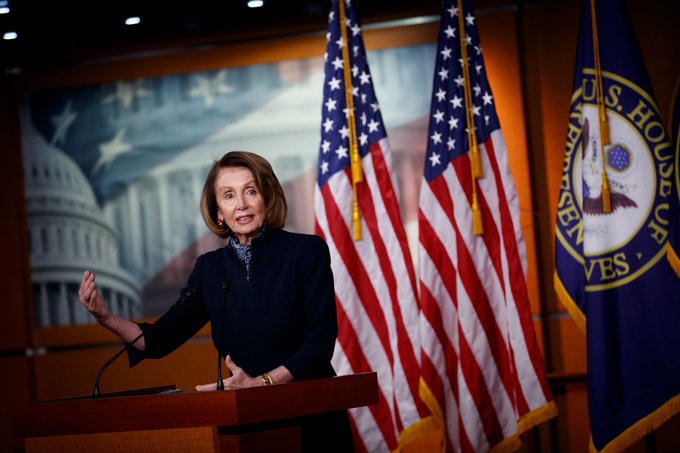 Nancy Pelosi, Speaker of the House of Representatives, asked whether Trump owed money to foreign interests, following an article on his financial records by the New York Times.

It alleges Trump paid only $750 in federal income tax in both 2016 and 2017. The President called the report “fake news”, the BBC reported on Monday.

Speaking on NBC, Pelosi said the report showed that “this president appears to have over $400 million in debt”.

“To whom? Different countries? What is the leverage they have?” she asked, adding: “So for me, this is a national security question.”

“The fact that you could have a sitting president who owes hundreds of millions of dollars that he’s personally guaranteed to lenders, and we don’t know who these lenders are,” she said, and suggested that Trump may be indebted to Russian President Vladimir Putin.

“What does Putin have on the president politically? Personally? Financially?”

According to the explosive report in the New York Times – which says it obtained tax records for Trump and his companies over two decades — Trump paid no income taxes at all in 10 of the previous 15 years. It adds that the president is personally responsible for more than $300m in loans, which will come due in the next four years.

It does not suggest Trump received any previously unknown income from Russia, though it said that the president had earned some money from foreign sources.

The records reveal “chronic losses and years of tax avoidance”, it says.

In a tweet on Monday, the president accused the media of bringing up his taxes and “other nonsense with illegally obtained information and only bad intent”.

He said he had “paid many millions of dollars in taxes” but received tax credits as well. Responding to the accusations of losses, Trump added he had “very little debt” compared to the value of his assets.

Trump has faced legal challenges for refusing to share documents concerning his fortune and business. He is the first president since the 1970s not to make his tax returns public, though this is not required by law.

The New York Times said the information scrutinised in its report was “provided by sources with legal access to it”.

The report came just days before Trump’s first presidential debate with his Democratic rival, Joe Biden, and weeks before the 3 November election.

The New York Times said it reviewed tax returns relating to President Trump and companies owned by the Trump Organization going back to the 1990s, as well as his personal returns for 2016 and 2017.

It said the president paid just $750 in income taxes in both 2016 and 2017, while he paid no income taxes at all in 10 of the previous 15 years, “largely because he reported losing much more money than he made”.

The newspaper also claims that “most” of Trump’s biggest businesses – such as his golf courses and hotels – “report losing millions, if not tens of millions, of dollars year after year”. (IANS)