Canberra– A study led by Queensland University of Technology analysed the tweets of successful industry and world leaders and found that US President Donald Trump is an ’emotionally unstable innovator’.

The team used the Forbes 400 and the Fortune 500 lists to pinpoint their targets and analysed more than 215,000 words posted by these individuals on Twitter to estimate their personality profile.

“We looked at the tweets and analysed characteristic language styles, contents, and patterns that together can reveal remarkably valid information on a person’s personality profile,” said Professor Martin Obschonka, lead researcher. 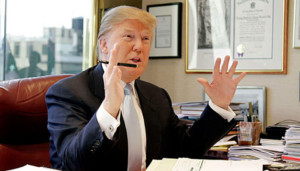 “With Trump as former business leader in such a powerful position, his entrepreneurial personality character is of very particular interest to the wider public,” Obschonka added.

Trump scored relatively high in neuroticism. Being high in this trait means being emotionally unstable and having trouble controlling urges.

“So in the end, it seems that we could identify a personality pattern in Trump that makes him so distinct from the superstar entrepreneurs and CEOs in that he really seems to resemble a type of an emotionally unstable innovator,” Obschonka concluded.

“Probably no other politician or businessman in the world is currently so strongly associated with tweets like Trump. His online personality really matters in his approach to political leadership as he makes world policy through his tweets almost every day,” another researcher Christian Fisch added.

The paper published in the journal Small Business Economics further stated that Trump shows stronger features of an innovator personality than the other influential business leaders.