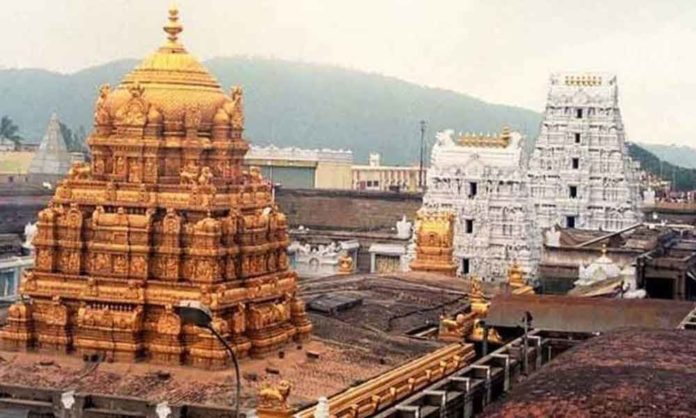 Hyderabad– The worlds richest Hindu temple at Tirupati in Andhra Pradesh is sitting on pure gold reserves of over 9,000 kg, officials said.

TTD has 1,934 kg gold in its treasury, including 1,381 kg which it got back from Punjab National Bank last month following the end of three-year term of gold deposit scheme.

TTD Board, the highest decision making body, is yet to decide on the bank where 1,381 kg gold will be deposited. According to sources, it was studying various gold deposit schemes and would opt for the one which offers the best returns.

The remaining 553 kg of gold in TTD treasury comprises small jewellery and other items offered by the devotees.

TTD often avoids revealing details of gold deposits but the controversy over the seizure of 1,381 kg of gold by election authorities in Tamil Nadu last month made the body to come out with the details.

A PNB truck carrying the gold from its Chennai branch to Tirupati was stopped and seized by the election authorities in Tamil Nadu’s Tiruvallur district on April 17 during vehicle checking in view of the polling scheduled the next day.

As the TTD initially denied that the seized gold belong to it, it kicked up a row with the allegations that the temple authorities did not even know that the temple gold was being brought back. The temple body, however, defended its stand saying the gold can’t be called TTD’s till it reaches its treasury.

The gold reached TTD treasury only two days later after the PNB submitted all documents to the Income Tax department to prove that it was temple gold and was being transported to Tirupati to hand it over to TTD on completion of term of gold deposit scheme.

TTD Executive Officer Anil Kumar Singhal came out with all details even as Chief Secretary L.V. Subramanyam ordered a probe into the alleged lapses into the release and transportation of the gold.

Balaji temple, as the hill shrine is also popularly known, had deposited 1,311 kg gold with PNB in 2016. The bank returned the same with an interest of 70 kg gold.

TTD revealed that 5,387 kg of its gold is with the State Bank of India and another 1,938 kg is with the Indian Overseas Bank.

For last two decades, TTD had been keeping its gold in various nationalized banks under gold deposit schemes.

After the announcement of gold monetization scheme by the Reserve Bank of India (RBI) in 2015, TTD deposited gold reserved under short, medium and long term schemes in various public-sector banks but only after the central bank brought certain amendments to ensure that the interest will be paid in the form of gold.

Believed to have been constructed over a period starting 300 AD, the temple attracts 50,000 to one lakh pilgrims every day. The number on special occasions like the annual Brahmotsavam and festivals goes up to 4-5 lakh.

According to officials, the devotees make offerings in the form of cash, gold and silver jewellery, property deeds and even demat shares.

The temple earns Rs 1,000 crore to Rs.1,200 crore from ‘Hundi’ collections or offerings by devotees every year.

During 2019-20, the TTD expects an overall revenue of about Rs 3,116 crore including Rs 1,231 crore from offerings and Rs 846 crore from interest on deposits in nationalized and private banks.

According to sources, the temple has over Rs 12,000 crore in fixed deposits in various banks.

It is also believed to be earning about 100 kg of gold as annual interest on gold deposits in the banks. (IANS)

However, the actual wealth of the temple is beyond anybody’s guess as the main deity at Balaji temple and several other processional idols are adorned with diamond-studded gold ornaments and antiques said to be worth hundreds of crores.