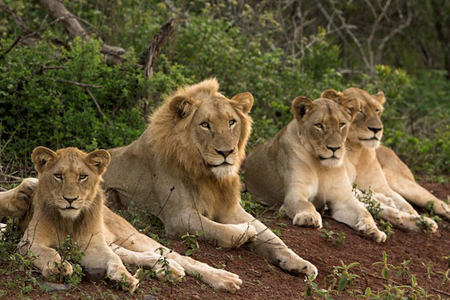 New Delhi– Three years after the Supreme Court directed that Asiatic Lions be “urgently” reintroduced from Gujarat’s Gir forests to a Madhya Pradesh sanctuary, nothing has moved so far.

The Prime Minister’s Office (PMO) has refused to disclose information exchanged with the the Madhya Pradesh Chief Minister in this regard, citing that it is still consulting a “third party”, according to an RTI reply.

Madhya Pradesh and Gujarat are locked in a legal battle over the issue for the past few years, with Gandhinagar loath to part with its lions. Officials believe that the lions are “not reaching their new home any sooner in the near future”.

The Wildlife Institute of India (WII) in 1989 pushed for a second natural habitat for the Asiatic Lions for their long-term conservation and to save them from epidemics.

The Supreme Court in April 2013 ordered “immediate” re-introduction of lions to Kuno Wildlife Sanctuary in Madhya Pradesh from Gir in Gujarat — the only surviving habitat of 523 Asiatic Lions in the world.

The court also fixed a six-month deadline for a committee responsible to accomplish the mission under the government’s Additional Director General of Forest Wildlife (ADG-WL).

While no lions have been moved, the PMO, recently replying to an RTI query of wildlife activist Ajay Dube, said that it has initiated discussions with a “third party” to decide if it should disclose any information regarding the matter.

The RTI sought information on letters exchanged between the Madhya Pradesh Chief Minister and the Prime Minister on shifting the lions from Gir to Kuno.

“The PMO also did not elaborate what this third party is. They also didn’t say if such letters were even exchanged or not,” Dube said.

This signals further delay in re-introduction of the lions.

“I don’t see lions being re-introduced in the near future, there has been no such proposal with the Gujarat wildlife department either. When there is a legal battle between states, what can the Centre do,” a senior official from Madhya Pradesh Wildlife department asked while speaking to IANS.

“..the flash-floods in Mareli Bhavnagar of Gujarat in July 2015 resulted in washing out of 10 Asiatic lions. This is what all the time scientists were referring to about occurrence of natural calamity,” the letter procured by Dube pointed out.

A second home for Asiatic Lions follows the concern to save this rare species from an epidemic leading to its complete wipeout. Lions at Gir are already considered by experts to be vulnerable to diseases.

In 1994, over 1,000 lions in Tanzania’s Serengeti National Park were killed within a few days due to an epidemic.

WII in 1993 found Darrah-Jawaharsagar and Sitamata Wildlife Sanctuaries of Rajasthan suitable and Kuno as the “best suitable” for the Asiatic Lions.

While officials don’t see re-introduction happening any sooner, if the legal deadlock is resolved at least one pride — which includes two lions and four lionesses — would be moved under “soft release”.

“Well, 15 years back Gujarat was concerned about the lion population, but now they have grown beyond capacity. I think they should not have any problem in giving us some lions now,” a Madhya Pradesh official told IANS.

As per the apex court, crores of rupees have been spent by the Union and State Governments for re-introducing Asiatic lions in Kuno.

The then ADG (WL) S.S Garbayal, assigned to conduct the re-introduction, was first promoted to Director General (Forests) in July, 2014 and post retirement appointed an expert member of the National Green Tribunal (NGT), posted in Bhopal, Madhya Pradesh. (IANS)