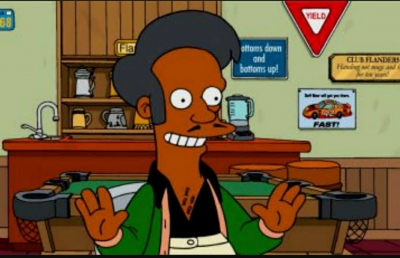 Los Angeles– ‘The Simpsons’ creator Matt Groening says he loves the character of Apu on the show, despite Groening and the series receiving flak for getting a white actor, Hank Azaria, to voice an Indian animated character. Azaria later stepped down as the voiceover artist, following the controversy.

“I think the Apu stories are fantastic, and he’s one of the most nuanced characters on a silly two-dimensional cartoon show. So, yeah, I’m proud of Apu, I’m trying not to open up another chasm of criticism, but it doesn’t matter what I say. I’ll get it anyway,” he said while appearing for an interview ahead of the show’s 700th episode,” said Groening, in an interview with USA Today.

The noted American cartoonist also revealed that they were searching for the right actor to voice for the character, and feels it has become a challenge ever since the producers of the show announced last June that non-white characters on the show would not be voiced by white actors anymore.

“We’re working on something kind of ambitious, but we have to see if we can make the stories work,” he said.

“Who can be against diversity? So it’s great. However, I will just say that the actors were not hired to play specific characters. They were hired to do whatever characters we thought of. To me, the amasing thing is seeing all our brilliant actors who can do multiple voices, do multiple voices. That’s part of the fun of animation, However, to be more inclusive and hire more people, I’m completely in favor of that,” he added. (IANS)

Indian American rom-com No. 2 after ‘The Sandman’ on Netflix global Top 10