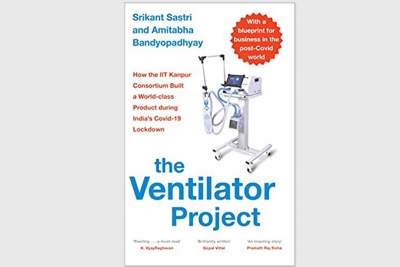 New Delhi– A raging pandemic, a dearth of life-saving equipment, and 90 days to manufacture a world-class ventilator.

On March 24, 2020, a nationwide lockdown was imposed in India in the wake of a formidable adversary, the Covid-19 pandemic. With the number of cases increasing exponentially, hospitals were faced with a dangerous shortage of life-saving equipment and personnel.

Under the mentorship of reputed industry leaders, the task force and the Nocca team worked tirelessly against unprecedented odds – trammelled by a ban on imports and telecommuting through Zoom and Whatsapp in the face of stringent lockdown restrictions – to manufacture the Noccarc V310 in record time.

This is the incredible story of its conception, creation and success, in the words of the task force co-leaders themselves.

Inspiring and riveting, “The Ventilator Project” (Pan Macmillan India) also offers an unmatched blueprint for business in the post-Covid era through first-hand lessons gleaned during the task force’s phenomenal 90-day run. It proves that India, with its deep recesses of talent and ingenuity, has the potential to be a world leader in both business and social impact.

Amitabha Bandyopadhyay is a scientist trained at the Albert Einstein College of Medicine, New York and Harvard Medical School, Boston. He established his independent research group in 2006 at the Biological Sciences and Bioengineering Department of IIT Kanpur.

Srikant Sastri is an alumnus of IIT Kanpur and IIM Calcutta, and wears many professional hats. He is Chairman, IIM Calcutta Innovation Park, and a board member at several other incubators. As an entrepreneurship evangelizer, he created the ChaloStartup web series and is on several government advisory bodies. As Chairman, I3G Advisory Network, he trains and advises corporations on accelerated business transformation.(IANS)