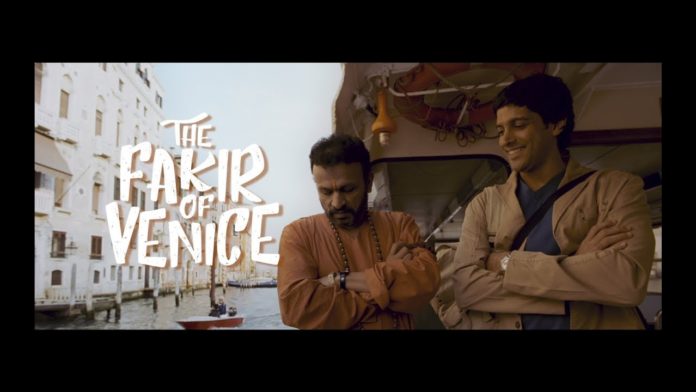 Director Anand Surapur’s “The Fakir of Venice” is based on a true story. It is the story of a strange relationship between two contrasting characters to carry out a deception.

On the face of it, it is a straight laced tale of a hustler, “jugadoo”, who goes to various lengths to ensure that he gets the right exhibit for an art installation in Venice. The exhibit is a ‘fakir’, a yogi who can perform the feat of endurance by burying himself in sand for hours – sort of an ambassador for mystic India.

Farhan Akhtar plays Adi Contractor, the production manager or the “go-to” man in the advertising fraternity and Annu Kapoor essays Sattar, the downtrodden man, who willingly surrenders himself to Adi’s demands.

Scratch deep into the narrative and you will find layers that subtly tell you about human psychology, greed, choices and much more. It also tells us the art of telling stories and how, “each one of us conjure stories or fairy tales”, to survive.

While Farhan’s portrayal of Adi is ordinary and perfunctory, it is Annu Kapoor, who gets into the skin of his character as the unassuming Sattar. With minimal dialogues, he woos the audience with a near-perfect, heart-rending performance. There are some beautiful moments in his trajectory, although they are sometimes so fleeting as to frustrate when they aren’t further developed.

Nevertheless, despite realising that the entire art-exhibit is a con-job, you empathise with Sattar and your heart bleeds for him. The contrast between the two characters, their chemistry and inter-play, are what keep you hooked to the very end.

The simplicity in the narrative and the wry humour are what make this film stand apart. Sample this, when Sattar innocently asks Adi why is there so much water in Venice, that it always appears flooded? To which Adi, in his inimitable style, retorts: “The gutters in Venice are jammed.”

With moderate production values, the film exploits the locales and its characters to the fullest. The cinematography, the background score and editing are all of ace quality. What is missing is maybe the over-dose of forced drama that one is so used to seeing in Hindi films.

Despite the film being is the cans for nearly a decade, the film does not appear dated.

Overall, this film is naïve and heart-warming and will clearly appeal to cinephiles. (IANS)