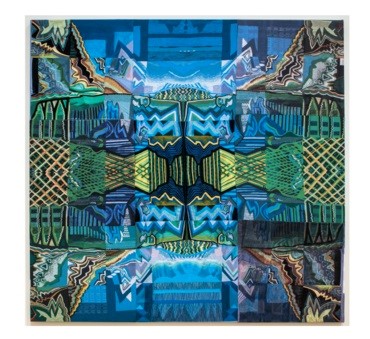 WELLESLEY, Mass. – The Davis Museum at Wellesley College presents Kanishka Raja: I and I, an exhibition of twelve works of art from the artist’s final series that combine traditional painting with woven, scanned, printed, embroidered, and reproduced counterparts.

A catalogue will also be published in conjunction with the exhibition in October 2019. The exhibition, on view in two contiguous spaces, the Joan Levine Freedman ’57 and Richard I. Freedman Gallery and in the Morelle Lasky Levine ’56 Works on Paper Gallery, runs from September 13 through December 15, 2019.

“The Davis Museum is thrilled to present Raja’s work, particularly at this moment. We’ve collaborated with the artist’s close friends and family to showcase his work and celebrate his legacy in the art world,” said Lisa Fischman, Ruth Gordon Shapiro ’37 Director of the Davis Museum. “He leaves behind a studio full of work that is at once conceptually heady and aesthetically alluring, extremely appealing on multiple registers. From among many options, I and I is a series that reveals Raja’s tremendous, distinctive talent and flair.”

Painter Kanishka Raja transforms a hybrid inheritance—the post-colonial confluences of an urban Indian childhood, familial roots in textile manufacture and clothing design, liberal arts and studio education in the US, bi-national footing in New York and Kolkata—into gorgeously patterned and painted work that both reflects and exceeds its foundational elements. As the artist put it, his practice “explores the intersection of representation, craft, technology, and the gaps that occur in the transmission of information.” Strategies of variation, repetition, reversal, and mirroring converge in “composite fields that tap into oppositions—the technological versus the handmade, original versus reproduction, and neutral versus contested.”

“This exhibition of Kanishka Raja’s important series is an occasion to become acquainted or reacquainted with his hyper-relevant vision of the fantasy of ‘globalism’,” said Laylah Ali, the Francis Christopher Oakley Third Century Professor of Art at Williams College and co-curator of the exhibition.

“Raja’s paintings do the smart, sly work of interrogating the dubious underpinnings of this fraught, powerful idea.”

The artist’s critical interest in the globalist fantasy endows his work with a sharp resonance, particularly amidst ongoing debates in the US regarding immigration, trade, and other policies with worldwide impact. There is also an intensely local connection to the work, given the artist’s roots in Boston where he arrived after graduate school, in August 1996. His first exhibitions included the 1999 solo presentation, Embrace the Schmaltz, at Brandeis University and the 2000 group show Pure, with Morgan Cohen and Joe Wardwell, at the Gallery@Green Street (where he also curated an exhibition). Those early career years also included exhibitions at Allston Skirt Gallery, and Momentum3: Kanishka Raja at the Institute of Contemporary Art, Boston, which celebrated his winning of the Digitas/ICA Artist Prize in 2004.

Raja’s work was also featured in two thematic exhibitions which were received as important markers of new influences on the local art scene, Hybrid IDs at the Mills Gallery, Boston Center for the Arts, and Home? Crosscurrents in South Asian/American Art at Brush Gallery, in Lowell, Mass.

Born in Calcutta in 1969, Kanishka Raja lived and worked in New York and Kolkata until his death in 2018. He received a BA from Hampshire College, an MFA from the Meadows School of the Arts at Southern Methodist University, and attended the Skowhegan School of Painting and Sculpture.

Raja’s work has been exhibited nationally and internationally with solo presentations at the Barbara Walters Gallery at Sarah Lawrence College, the Rosenwald-Wolf Gallery at the University of the Arts, Philadelphia, Greenberg van Doren, Jack Tilton Gallery, and Envoy, in New York, Galerie Mirchandani + Steinrücke, Mumbai, and the Institute of Contemporary Art, Boston; and group exhibitions at the Asia Society Museum, NY,  the Dorsky Museum of Art at SUNY, New Paltz, the ICA Philadelphia, and the Rose Art Museum, among others.

Raja received a Painters and Sculptors Grant from the Joan Mitchell Foundation in 2011 and the Digitas/ICA Artists’ Prize from the Institute of Contemporary Art, Boston in 2004; and was awarded a Lower Manhattan Cultural Council (LMCC) Workspace Residency, a Fellowship at the Civitella Ranieri Center in Umbertide, Italy, and an NEA funded residency at the International Studio & Curatorial Program (ISCP), New York. In 2016, he completed work on a major Percent for Art commission from the Department of Cultural Affairs, New York City for a permanent public artwork.

Raja’s work is held in many private collections, and public collections including the Harvard Art Museums, Harvard University, the Frances Young Tang Teaching Museum and Art Gallery at Skidmore College, the Museum of Contemporary Art, Madison, the Department of Cultural Affairs, New York, the Pizzuti Collection, Columbus, OH, and the Meadows Art Museum, in Dallas, TX.

The Davis Museum celebrates the opening of the fall 2019 exhibitions, including five special installations that bring spectacular energy and creative artistic innovation to the Wellesley College campus. The major exhibition, Fatimah Tuggar: Home’s Horizons, along with Kanishka Raja: I and I, Recent Acquisitions: New Photographs (Haley Morris-Cafiero and Habiba Nowrose), Hidden Histories: Revealing the Life of a Painting and Alexandria Smith: Seed to Harvest, the third “Windows Invitational” commission will be on view, along with rotations that renew the presentations in the Permanent Collections Galleries.

Join exhibition co-curators Laylah Ali and Lisa Fischman, along with friends, family, and fans of the artist, in celebrating the life and work of Kanishka Raja.

One of the oldest and most acclaimed academic fine arts museums in the United States, the Davis Museum is a vital force in the intellectual, pedagogical, and social life of Wellesley College. It seeks to create an environment that encourages visual literacy, inspires new ideas, and fosters involvement with the arts both within the College and the larger community.