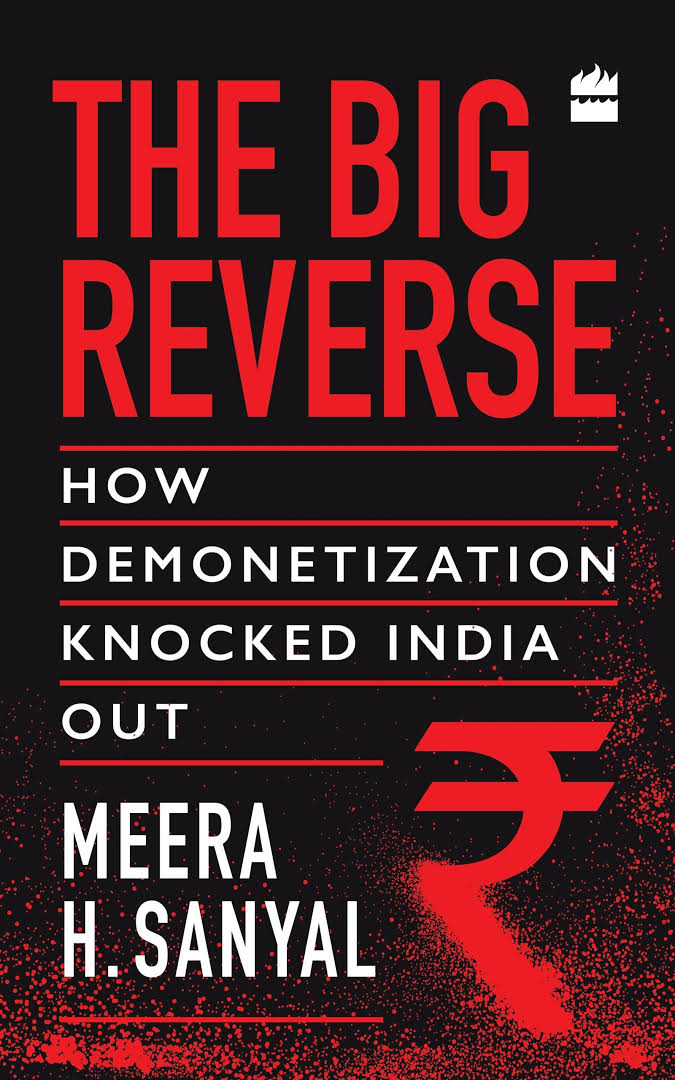 New Delhi– Exactly two years after Prime Minister Narendra Modi’s government commenced the exercise to ban over 85 per cent of high-value currency notes, former banking industry honcho Meera H. Sanyal says in her upcoming book that in its implementation, the 2016 demonetisation was an “unmitigated disaster”.

Sanyal, former CEO and Chairperson of Royal Bank of Scotland in India is currently a member of the National Executive Committee of the Aam Aadmi Party. In the chapter titled The Surgical Strike, she says that as financial and human costs of demonetisation began to add up, it became “painfully clear that what had been intended as a surgical strike on black money had regrettably turned out to be a carpet-bombing of the Indian people and our economy. It was a classic case of the road to hell being paved with good intentions.”

The Big Reverse: How Demonetization Knocked India Out — brought out by Haper Collins India — will be available in stores from November 8, 2018.

Following is an extract from the book:

There is no doubt that the PM touched a deep chord in the heart of India, when he talked of the menace of corruption. Who among us has not felt “Some people have misused their office for personal gain… that corruption and black money tend to be accepted as part of life… that it has afflicted our politics, our administration and our society like an infestation of termites…”

According to the 2017 Transparency International Corruption Perception Index (CPI) report, 73 per cent of the bribes paid in India were by “the low economy groups, who had to pay money due to unavailability of other options, or had less influence to avoid paying bribes… high bribes were demanded for accessing public education and healthcare facilities… approximately 58 per cent and 59 per cent bribery rates were seen in education and healthcare sectors in India, respectively. The times when people paid a bribe was also seen to be almost equally high for police, identification documents, and basic amenities.”

The PM’s promise that Demonetization would eradicate corruption was undoubtedly one of the main reasons for the initial goodwill towards Demonetization from the very poor, despite the hardships it inflicted on them. Sadly, however, this promise too was belied.

In February 2018, Transparency International reported that India continued to be among the most corrupt countries in the world. In the 2017 Global Corruption Perception Index report, India with a score of 40 points, was ranked 81, down two places from its ranking of 79 in 2016.

This demolishes one of the main arguments presented in favour of Demonetization. The Economic Survey for 2016-2017 had stated, “Across the globe there is a link between cash and nefarious activities: the higher the amount of cash in circulation, the greater the amount of corruption… In this sense, attempts to reduce the cash in an economy could have important long-term benefits in terms of reducing levels of corruption.”

As it happens, data does not support this argument. Japan is a case in point. Japan’s Currency to GDP ratio in 2015 was 18.61 per cent, much higher than India’s at 12.51 per cent. In the same year (2015) Japan was ranked as the 18th least corrupt nation in the world while India was ranked 76th, i.e. Japan, which has a much higher currency to GDP ratio than India, has far less corruption.

Clearly, therefore, Demonetization failed in its second big goal — eradication of corruption. If anything, the new 2,000 notes made it simpler for corrupt officials to take and stash away larger bribes, compounding the problem for ordinary Indians. (IANS)