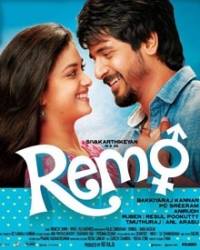 “Remo” is a film about cross-dressing. Men masquerading as women, I thought, could only be aesthetic in the hands of a Dustin Hoffman or a Kamal Haasan.

He is in almost every frame of this lengthy comedy, furnishing the rapid fire goings-on with a kind of urgency that the script writer forgot to exercise over the incidents that pile on in the narrative without even pretending to be uncharted territory.

It’s all familiar ground, livened up by Sivakarthikeyan playing a Rajnikanth fan who disguises himself as a nurse to be “close” to the girl he has fallen in love with (Keerthy).

Clearly Arun/Remo has not seen the film “Pink”. And a woman’s no does not mean no here. We can all go haaw and haaa and hoo about the hero as a stalker in high heels. Or we can take the other route and just have fun. The line between courtship and stalking has always been thin in Indian cinema.

Sivakarthikeyan walks that fine line with a luscious gait, neither overdoing the feminine act nor letting us forget that he is, at the end of the day’s makeup, a man.

It’s a masterstroke to retain Sivakarthikeyan’s own voice in the feminine disguise. And full marks to sound designer Resul Pookutty for exploring the femininity in the actor’s voice profile without forfeiting his boyish prankster’s image. The actor imparts squeaky sensuality to his female disguise.

He is borderline convincing in his makeover, as he is required to be by the scattered but amusing script. It is after all, the hero doing a heroine. And the leading man invests a reined-in bravura performance stripped of excessive girlie trappings.

The narrative sadly misses out on genuine moments of gender sensitivity to rather concentrate on quick-fix remedies to age-old gender discrimination. Intermittently the storytelling throws in homilies on how women are treated by a social structure that favours the physically strong. But we are straying. The film would rather be fun than thought provoking, which is fair enough.

“Remo” is fun. But don’t look for political correctness here. Just focus on how apt and empowered Sivakarthikeyan is in his nurse’s avatar. P C Sreeram’s cinematography favours a splashy mood without getting garish. That’s quite a balance achieved, not unlike our hero walking so elegantly in high heels. (IANS)