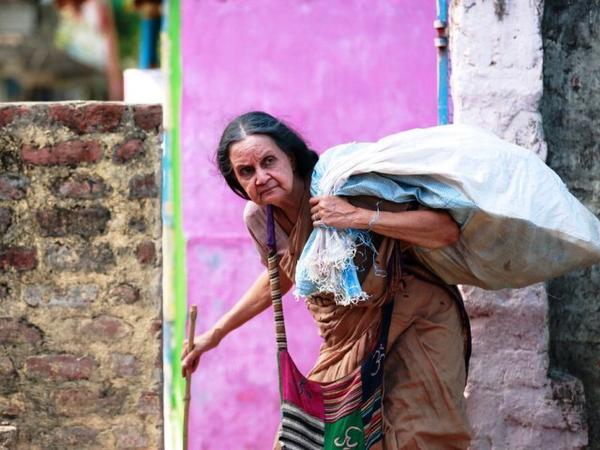 Actress Lakshmy Ramakrishnan, who likes to tell her stories through strong, free-spirited women, proves once again that there isn’t a better contemporary filmmaker than her when it comes to the portrayal of women on screen.

Right from her first directorial project, “Aarohanam”, Lakshmy has been giving viewers strong women characters to celebrate, to root for, and she does so without being judgemental about other characters, especially men and their actions.

Lakshmy has a simple, uncomplicated approach to filmmaking, where it’s all about writing a solid script, etching out memorable characters and, finally, casting the right people. The title character Ammani is played by 82-year-old Subbalakshmi, while Lakshmy plays Salamma, and the bond they share is heartwarmingly beautiful, inspiring and moving.

There’s so much about life that “Ammani” tries to teach us, in ways we don’t get tired of watching.

Ammani makes a living by selling trash. She is independent, and she lives life with a happy-go-lucky attitude. She believes in living life to the fullest by living in the present. In a scene, when asked whether she worries about dying alone, she says when we close our eyes, how does it matter what kind of farewell we’re given.

Salamma works as a help in a government hospital, and she is on the verge of retirement. She doesn’t live in the present. In a casual banter with her colleagues about a patient who died a lonely death, she imagines the kind of send off her sons would give her, paving way to a scene where she visualises herself in a ‘death’ song featuring witty lines.

Ammani lives as a tenant in Salamma’s house and when their lives cross paths, it makes the viewers look at life from different viewpoints. It makes us realise the importance of staying independent and how money can bring out the true colours of people.

Lakshmy started her career as an actress, mostly playing mother’s roles, and she is a mother of three in real life. Perhaps it is because she’s proud of a mother’s role that all her directorial projects so far have featured very strong mother characters.

If it was Viji Chandrasekhar in “Aarohanam” and “Nerungi Vaa Muthamidathe”, it’s Lakshmy herself in “Ammani”, excelling in the mother’s role and making us empathise with her character.

It’s a joy watching Lakshmy on screen, playing Salamma with ease and conviction.

While most filmmakers struggle to make a decent film by staying behind the camera, Lakshmy aces both in front of as well as behind the camera. She also has a great eye for talent and the way her actors perform, leaves you wondering if she should seriously consider becoming a casting director too.

“Ammani” is the most rooted film in its setting since “Kaaka Muttai”, and the way it is shot is proof of it. Shot as realistically as it can get in a small house in Vysarpadi (Chennai), Lakshmy captures the aspirational life of a lower middle-class household beautifully.

She is aptly supported by the stunning visuals of Imran Ahmedh KR and composer K’s fitting music, especially his choice of tunes in the most dramatic moments of the film.

“Ammani” proves that simple stories, when told with unflinching realism and unparalleled sensitivity, can strike a chord with the viewers and make for a compelling watch.