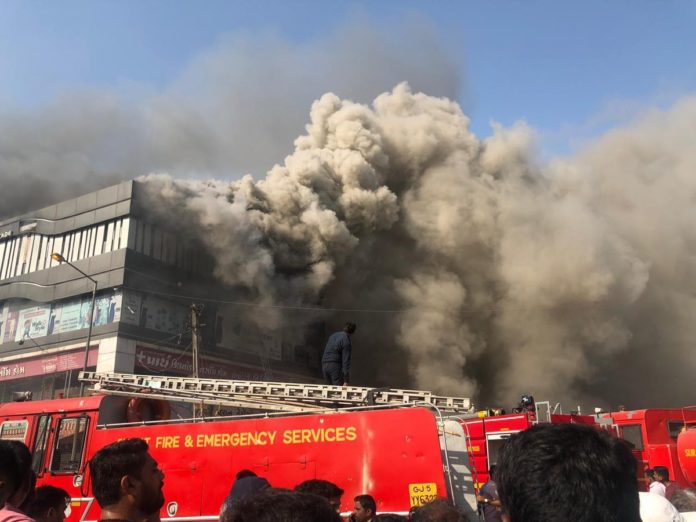 Surat– Shaken out of stupor by the devastating fire in a coaching centre in a four-storey building here that claimed 23 lives, all of Gujarat’s eight municipal corporations and scores of municipalities on Saturday ordered shutdown of all coaching centres running in commercial complexes.

Officials said that the coaching centres had been ordered to put all fire safety norms in place, without which they would not be allowed to function.

The authorities started investigating fire safety norms in coaching classes, private hospitals and other buildings in various towns and cities of the state. Many of these buildings, including a reading library in capital Gandhinagar, were sealed, along with 40 coaching centres in Bharuch and as many others at several places.

Two others, including the builder of the commercial complex Harsukh Vekaria, were also booked. Search was on for the builder, he added.

Sharma told reporters that: “We have ordered investigation into the fire incident by the ACP, Crime Branch. A case under Section 304 of the Indian Penal Code for culpable homicide has been lodged against the accused.”

Official sources revealed there were no proper fire safety norms being followed in the building. Two shops and around a dozen two-wheelers parked below were also gutted in another fire sparked off by the blaze because of the electric wires and pole situated nearby.

The death toll in the devastating blaze rose to 23 by Saturday, even as seven students battled for survival in hospitals, officials said. Two of the injured students were on ventilator and five admitted to intensive care units (ICU). The condition of four others was reported to be stable.

Most of the students who were killed in the fire were between the age of 14 and 17. Some were expecting their Class 12 results on Saturday.

The fire broke out late afternoon around 4 pm in the Smart Design Studio, which ran illegally on the covered terrace of the Takshashila building that effectively became fourth storey.

Officials informed that the fire started at the ground floor and reached the top floor. Some students of another class, rushed to the terrace to escape the fire and found themselves stuck there. The only way to the top floor was a three-foot wooden staircase, which had been reduced to ashes.

According to witnesses, there must have been around 50 students in the Takshashila Arcade building when it caught fire. Graphic videos on the social media showed more than 10 panic-stricken students from the third and fourth storey jumping off to escape the blaze and the billowing smoke. What was more tragic, hundreds of people watched and many shot videos and pictures while student after student fell off the building like ninepins. Half of the dozen students who jumped in panic were killed.

Eyewitnesses alleged the fire brigade staff, which got delayed by half an hour, did not have any nets to hold the students jumping from the building and even their hydraulic staircase could not go beyond a little over the second floor of the building.

The cause of the devastating fire was yet not clear, though it was believed by officials that it was sparked off by short circuit in a sweet shop in the same building.(IANS)