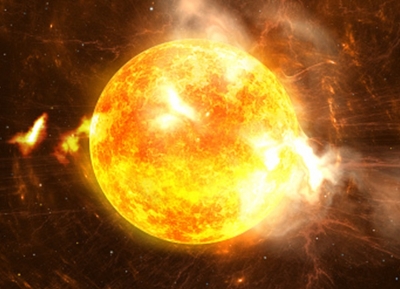 Washington– The Sun has emitted its strongest solar flare seen since 2017.

According to the US Space Weather Prediction Center (SWPC), an X2.2 flare occurred at 11.57 p.m EDT on April 19. The flare erupted from a region just beyond the southwest limb of the Sun – likely former Region 2992.

The strong flare was associated with multiple bursts on specific radio frequencies but did not result in coronal mass ejection (CME).

“Forecasters are waiting for available coronagraph imagery from the NASA/SOHO LASCO instrument to confirm if a CME took place, and if so, analyse accordingly,” SWPC said.

“However, as the source region of the flare was beyond the southwest limb, initial analysis suggests any CME is unlikely to have an Earth-directed component,” it added.

“Today’s X2.2 solar flare is the strongest solar flare of the current Solar Cycle thus far. It peaked at 03:57 UTC and came from sunspot region 2992 which is rounding the western limb. The eruption was fairly impulsive and the resulting CME is not earth-directed,” the agency said on Twitter.

Region 2993 is one of two moderately complex sunspot groups currently present on the northeast quadrant of the Sun – the other being Region 2994.

The moderate level flare was associated with multiple bursts on specific radio frequencies. The imagery from the NASA/SOHO LASCO instrument confirms a CME took place. But scientists are yet to determine if it will have an effect on earth.

While X-class solar flares are the strongest types of storms on the sun, the weakest are A-class; B- and C-class storms are also relatively moderate.

More powerful M-class storms and above can supercharge the Earth’s northern lights displays while the strongest X-class storms can pose a risk to satellites and astronauts in orbit when aimed directly at Earth.

X2.2. X-class flares are the strongest category measured by scientists, and higher numbers following the X represent an increase in the power of the eruption, CNet reported.

NASA has recorded a few X1 flares in the past year, but this is the strongest seen since the sun blasted off a pair of monster X-class flares, including an X9, in the second week of September 2017.

The strongest flare ever observed was in excess of X28, in 2003.

The big blast is the latest indication our current solar cycle is heating up. The sun is currently in an increasingly active phase of its 11-year solar weather cycle and the current cycle is known as Solar Cycle 25 which began in 2019. We are currently building toward a peak of activity that will come around the middle of the 2020s, the report said. (IANS)