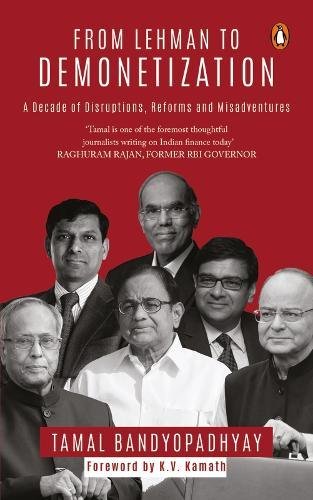 While last year saw three valuable contemporary insights into Indian banking — two by former Reserve Bank of India Governors and a brilliant short history of the RBI by economic journalist T.C.A Srinivasa Raghavan — a gap, from the perspective of commercial banks in the country, now stands as competently filled by another journalist, Tamal Bandyopadhyay with “From Lehmann to Demonetization: A Decade of Disruptions, Reforms and Misadventures”.

In writing on banking and finance and about the expansion of private banks, Bandyopadhyay — who has earlier written on how Bandhan became a universal bank and on the Sahara scam — devotes a part of this book to the historic points of friction between the government and the RBI. The discussion on political economy then takes him inevitably to dwell briefly on the single-most disruptive measure since Independence, of demonetisation, to which the other authors made only passing references.

The Lehmann in the title refers to the 2008 US financial crisis, the damaging impact of which the globalised world is slowly still recovering from. Meanwhile, anti-globalising trends have taken shape on both Atlantic coasts and are deepening across Europe, while there is a twist to all this with countries like India and China becoming the vocal votaries of globalisation.

India rode the world economic slowdown unleashed by the collapse of US banks better than most others, also because of the financial system being insulated by the RBI, as well as on the strength of the country’s macroeconomic fundamentals. “A cautious and conservative regulator ring-fenced the Indian banks by not allowing them to take excessive risk,” the author notes.

The book begins with a vivid chronological description of the crumbling world of a young finance professional in Mumbai following the colllapse of Lehmann Brothers in the US in September 2008.

A collection of columns and interviews that Bandyopadhyay has published in the Mint, “From Lehmann to Demonetisation” goes to the heart of an issue at the centre of Indian finance now, but the roots of which go back to the boom period in the economy during the last decade under United Progressive Alliance (UPA) rule — the problem of accumulated non-performing assets (NPAs), or bad loans, in the Indian banking system that have reached the staggering level of nearly Rs 9 lakh crore. Only the bad loans of state-run banks add up to around Rs 7.5 lakh crore. NPAs are a major factor in the falling levels of private investment, and coupled with highly leveraged corporate balance sheets, are holding up higher growth in the Indian economy.

“Simply put, Indian banks are caught in a vicious cycle: They are not willing to lend for fear of adding to bad assets; this dents their interest income and profitability; and that, in turn, further erodes their ability to lend as they are not able to plough back profits to bolster their capital,” Bandyopadhyay writes.

On the choice of ways to deal with the situation, he says the banks prefer to restructure loans about to turn bad and not write them off as this would hit their balance sheets. So a CEO prefers to deal with the issue in a denial mode and keep making profits till the successor chief executive starts the “clean-up.”

“Ironically, the new CEO too leaves behind the same legacy for his successor when he retires,” which tendency the author likens to the “saas-bahu syndrome” in the Indian family, where the new bride, on getting older, gives the same ill-treatment to her daughter-in-law that she had received from her monther-in-law.

Some public sector banks have been in denial mode on their NPAs till previous RBI Governor Raghuram Rajan “drove the first-of-its-kind asset quality review (AQR) for these banks”, to reveal the true picture on their bad loans. On the other hand, the regulator has become more “adventurous” about permitting private banking, which have much lower NPAs. “And then, suddenly we got approval for 23 banks in two years since August 2015 — two universal banks, 10 small banks and 11 payments banks,” Bandyopadhyay writes.

In June last year, the RBI referred 12 accounts, totalling about 25 per cent of the gross NPAs, for resolution under the new Insolvency and Bankruptcy Code (IBC).

The government has embarked on a two-pronged strategy on bad loans. On the one hand, it has brought in the IBC which provides for a six-month time-bound insolvency resolution process. On the other hand, it has approved a Rs 2.11 lakh crore recapitalisation plan for state-run banks. Rating agency Crisil says banks will need to take a haircut of up to 60 per cent on their bad loans to resolve the NPAs. According to the author, besides the massive government recapitalisation, public sector banks need to raise over Rs 1 lakh crore from the markets to meet capital requirements.

The second part of “From Lehmann to Demonetisation” contains the profiles of 15 people who “exemplify the transformation of the Indian financial sector in the past decade”. These include regulators, professionals-turned-entrepreneurs, investment bankers and a fund manager, and provides a glimpse into the personal side of these “seminal leaders”.

A must-read for students of Indian finance, written in a style that the BRICS Bank Chairman K.V. Kamath describes in the foreword as “witty, pithy, sharp and tongue-in-check — all at the same time”. (IANS)