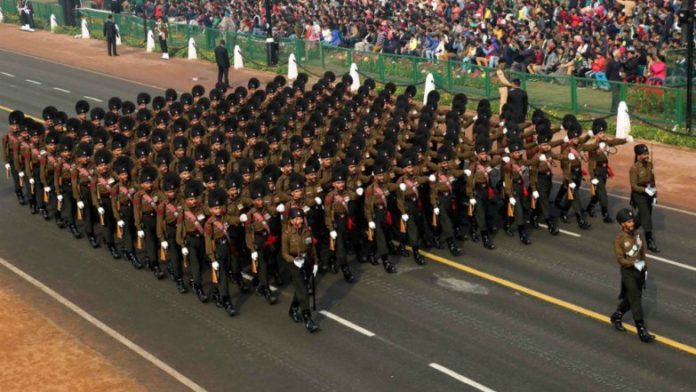 Ahead of the parade, Prime Minister Narendra Modi drove down Rajpath to the Amar Jawan Jyoti at India Gate where he paid homage to the Unkbown Soldier before returning to the saluting base to recieve President Ram Nath Kovind and his South African counterpart, Cyril Ramaphosa, the chief guest on the ocassion.

The national anthem was then played and the tricolour unfurled as a 21-gun-salute boomed.

The solemn ceremony over, four IAF helicopters rumbled overhead, flying the tricolour and the flags of the three services and showering petals on the crowds and making for much excitment.

The parade then commenced under the command of Lt General Asit Mistry, the General Officer Commanding of the Delhi Area, with his deputy, Major General Rajpal Punia, following.

As in the past, the parade was led by the lancers of the 61 Cavalry in their blue and black uniforms, astride powerful steeds – the only active serving horse cavalry regiment in the world.

And in a departure from tradition, right behind them came the Indian Army’s Main Battle Tank (MBT), the T-90 Bhishma followed by Infantry Combat Vehicles and the track-mounted Surface Mine Clearing System (SMCS).

Next up was the the newly-inducted K-9 Vajra self-propelled howitzer and the M 777 A2 Ultra Light Howitzer (ULH), which were inducted last year. Both were making their debut at the Republic Day parade.

The Transportable Satellite Terminal (TST) that can transmit high quality data and is the mainstay of military communication, as also the Akash missile weapon system were the other attractions in the mechanised columns.

It was then the turn of the marching contingents to take centre-stage – drawn from, among others, the Madras Regiment, the Rajputana Rifles, the Sikh Regiment, the Gorkha Brigade, the Army Service Corps, the Territorial Army and the Veteran Tableau that showed retired Army personnel of the age of 95 years.

In between them was the massed band of the Sikh Light Infantry, the Mahar Regimental Centre and Ladakh Scouts, playing the tune ‘Shankhnaad’, also for the first time in the parade.

The focus then shifted to the Indian Navy contingent, comprising 144 young sailors led by Lt Commander Ambika Sudhakarn that gave a cracking salute to President Kovind, the Supreme Commander of the Indian armed forces.

The naval tableau depicted the combat potential of the multi-dimensional Indian Navy of the 21st century.

The Indian Air Force marching contingent also consisted of 144 air warriors. It was followed by a tableau showcasing scaled-down models of aircraft, radar and missile system which have been indigenously designed and manufactured.

The Defence Research and Development Organisation (DRDO) displayed its Medium Range Surface to Air Missile (MRSAM) developed in collaboration with Israel and and Armoured Recovery and Repair Vehicle mounted on the chassis of an indegenously-developed Arjun MBT.

In a powerful statement of empowerment, the all-women’s contingent of the Assam Rifles, another first at the parade, was led by Major Khushboo Kanwar.

Among the other marching contingents were those of the Indian Coast Guard, Central Reserve Police Force, Railway Protection Force, Delhi Police, the National Cadet Corps and the National Service Scheme. The Border Security Force Camel Contingent – the world’s only such unit – and their band playing “Hum hai Seema Suraksha Bal” raised quite a cheer.

Twenty-two tableaux, comprising 16 from different states and Union Territories and six ministries, departments and other institutions, displaying the life, times and ideals of Mahatma Gandhi moved on the Rajpath.

The IAF’s Su-30 MKI than enthralled the audience with a Vertical Charlie, zooming up into the sky and disappearing from sight.

Baloons were released and the national anthem was played to mark the culmination of the 90-minute ceremony. Subsequently, Soon after the President and the chief guest left.

At the end, the Prime Minister, as like previous years, walked down the road a few metres on Rajpath waiving towards the crowds before he boarded his car. (IANS)