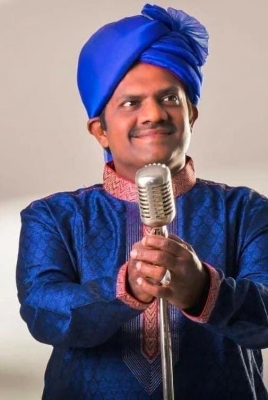 Chennai– Sending shockwaves across the Tamil film industry, popular singer Bamba Bakya, known for having sung several chartbusters, passed away on Thursday night. He was 49.

Reports doing the rounds on social media suggest that the singer, who has rendered several hit songs including the opening lines of the recently released ‘Ponni Nadhi’ from Mani Ratnam’s upcoming magnum opus ‘Ponniyin Selvan’, passed away after suffering a cardiac arrest.

While Bakya is his original name, the singer was referred to as Bamba Bakya as he was able to render a song just like a sufi singer Bamba.

Several stars from the Tamil film world have condoled the death of Bamba Bakya.

Actor Karthi tweeted: “Really saddened by the sudden demise of Bamba Bakiya. I pray that his family and friends have the strength to bear this huge loss.”

Actor Shanthanoo Baghyaraj too expressed his condolences on Twitter. He tweeted: “Loved his voice. Gone too soon.” (IANS)