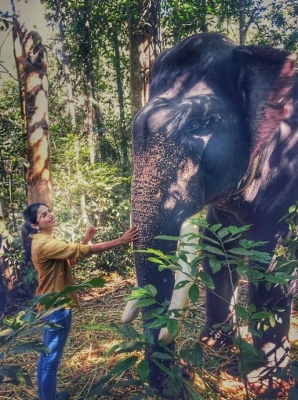 Mumbai– Shriya Pilgaonkar is thrilled to be a part of her upcoming film Haathi Mere Saathi, where she features alongside Rana Daggubati.

Shriya took to Instagram on the International Day of Forests to share her experience of shooting in rainforests full of wild elephants. The trilingual film “Haathi Mere Saathi” marks the actress’ Tamil and Telugu debut.

Shreya shared photographs on Instagram on Sunday evening where she can be seen happily posing with elephants and riding on their back. In one picture, the actress also hugs a tree.

She wrote: “It’s not everyday that you get to film in a rainforest with wild elephants for company. This film demanded that we surrender to nature. Listen. Observe Learn. Truly feel that oneness & sense of responsibility. Our trilingual film releases on 26th March in theatres ! #WorldForestDay #Aranya #Kaadan #HaathiMereSaathi #TamilTelugudebut.”

The film has been shot in the dense forests of Kerala and Thailand. Directed by Prabhu Solomon, “Haathi Mere Saathi” has background score by Oscar-winning sound designer Resul Pookutty.

“Haathi Mere Saathi” is titled as “Kaadan” in Tamil and “Aranya” in Telugu. The film is set to release in theatres on March 26, and also stars Pulkit Samrat and Zoya Hussain. (IANS)